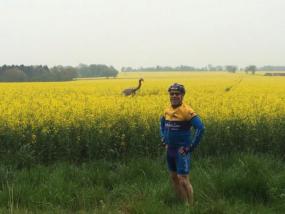 We tried to explain to Brian that it was only a toy but he did insist on trying to feed it.  That was the last we saw of him as the killer Rhea chased him down the road whilst trying to disembowel him with its six inch talons.  Lots out today despite the promised downpours which turned out to be just a two minute heavy shower.  The meds went to Hitchin with Alex whilst Bob took the easies to Buntingford.  Only one puncture and we were all home before the rains really started.