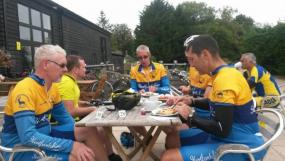 Six takers for this trip to Shenley.  Followed the standard in\back route via Bayford, Tylers Causeway, through the slums at Brooky Park, alongside the A1 & the M25 to Shenley.  The promised rain never materialised and it was a good, straightforward journey.  The only blot on the landscape was coming across a panicky lady who had lost her\a child.  Some horses had dislodged one child before bolting with another.  We helped search, but drew a blank down every lane.  Assumed that the horses made their way back home.

Cat 3 run led by Graham
There was a healthy turn-out for the Much Hadham start with several trying a cat 3 for the first time. Once a start-line puncture had been fixed, we set off towards Great Bardfield following a route south of Bishops Stortford via Spellbrook and Great Canfield. Passage through Bacon End plus the "Blue Egg" destination seemed to set of some kind of primitive breakfast urge in the riders and what had been a moderately organised group turned into an unruly rabble after Dunmow. However, all seemed to enjoy themselves and the excellent food. Return, via Thaxted, Elsenham and Stortford, was in two groups with a faster group pressing on. Ian P had a puncture - efficiently dealt with - and all enjoyed some unexpected sunshine at the end. 14 riders 50 miles

Cat 6 run led by Bob
With half a dozen regular Easies defecting to higher category rides, there were still enough starters to fill the Something Lovely Tearooms. Riding out through Wareside , Babbs Green, Barwick Ford, Whitehill, Great Munden and down Mentley Lane to Puckeridge, 14 riders descended on Kerry and her staff to devour a delicious selection of home made cakes.
Martin T was now home, John F, Cathy P and Peter set off for a different, longer, route home,  Bruno and Jane left us at Standon Village for a shorter route home, and that left 8 to stick to the meticulously planned route to ensure 30 miles completed by the time we got back via Bromley Lane, Much Hadham, Perry Green, Widford and Stanstead Abbotts. No punctures or other mishaps (but then why would we without our regular candidates?)