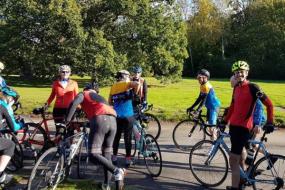 The Wheelers' annual club Hill Climb, took place in Digswell up the New Road climb from the B1000 to Harmer Green. In complete contrast to the previous week the weather was perfect, cool and sunny and ten riders contested the event - five Herts Wheelers and five from North Road CC. As has so often been the case this year the race was won by the Wheelers’ Gareth Wignall, in a time of 2:35 - the fastest in the event since 2014. North Road’s Michael Atkinson was second in 2:39 with Wheeler Sam Ball third in 3:28. First woman home was Ivana Prokopova (NR) in 3:53 followed by Nicolette Chandler (NR) in 4.15 and Marcia Carnegie defending her position as the leading Wheeler in 6:15.
Thank to the North Roaders for supporting our event. If Marcia hadn't turned up with a minute to spare they'd have outnumbered us! And thanks to Bob for acting as starter, Peter B for acting as pusher-off and Dagmar Pfeiffer of North Road for helping Peter W with timekeeping at the top of the hill.
Full results were: