The 1200Km Paris-Brest-Paris (PBP) race first took place in 1891 and was part of the professional calendar, every 10 years, until 1951. At this point the professionals decided there must be an easier way of making a living and dropped out. Subsequently, the Audax Club Parisien (ACP) has run the event for amateurs. It takes place every four years and has to be completed in 90 hours. Doing so involves competitors in riding through the night, sleeping in ditches and on village-hall floors and acquiring numbness in parts that other rides cannot reach. Incidentally, despite the A in ACP, these rides are what the French call "randonées"  - an "audax" being ridden as a regimented group behind a team captain. Naturally that does not stop us using the wrong name in the UK. 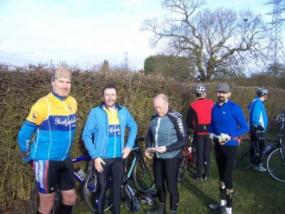 Wheelers at the start of an Ugley Audax

My knowledge of these horrors comes solely (I am pleased to say) from reading about them in Arrivée, the magazine of Audax UK (AUK), in which writers pretend to have enjoyed the event. Qualification for the PBP requires demonstration of commitment and mental instability by riding "brevet" of 200, 300, 400 and 600 Km. It is for the certification of these rides that AUK exists. PBP aficionados only grudgingly class 200Km as a “long-distance ride”. To me, though, it is around the limit of the feasible, by which I mean I can do it and still be capable of drinking a pint before falling into bed. Fortunately, there are others like me and AUK has come to organise many 200, 100 and 50 Km events, even in non-PBP years. These are basically just for fun; you select your event, post your entry fee (~£5) and are sent your route and the starting time. At the start you are given a brevet card which must be stamped at the various controls (or contrôles - we audaxers like to pretend we are in France). Controls are at 20-30 mile intervals and generally involve cake. Maximum and mini-mum average speeds are set, usually 15-30 Kph (the maximum serves mainly to distinguish an audax ride from a race in the eyes of the police).

The atmosphere is generally similar to a club run, though with an ever changing, (sometimes disappearing), set of companions. Often I find myself hanging on to a fairly fast group until the first control. After that, small groups of similar riders tend to form. Occasionally, though, I have ridden long stretches on my own. Routes are chosen to represent the best of local roads. There are no way-markers so, unless you are skilled at riding hands-off whilst reading an A4 sheet, some means of attaching the instructions to bars or forearm is recommended. I can tell you that the strategy of simply following every-one else fails at the first puncture or, in my case, hill. You can find a calendar of events at http://www.audax.uk.net, together with excellent sections on cycle lighting and GPS - you don’t have to be an AUK member.