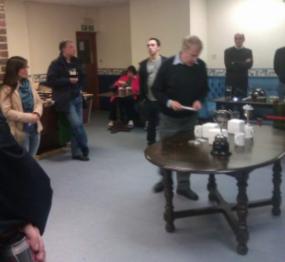 Around 35 Wheelers and friends met in the club-room on Thursday 16th Feb to sell, swap or otherwise foist unwanted bike bits onto each other. Younger members were staggered to observe the oily, cob-webbed items that older members apparently believed were marketable; they were even more staggered when this often turned out to be the case. In amongst the vintage stuff there was some nice newer stuff and several bargains were struck to mutual advantage.

Several guests came along including: Jenny Miller, who is helping several members through sport and remedial massage; Campbell Rae who will run the new Highway Cycles shop in Hertford; Dean Taylor who runs a bike-fitting business in Hertford (which, again, has helped several members) and Sam Moye who has started a mobile bike repair business in our area.

The evening began with JP presenting the remaining awards from last season to members who had not been able to attend the Xmas lunch.