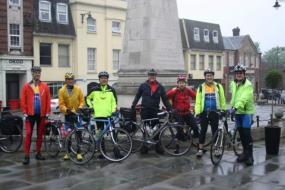 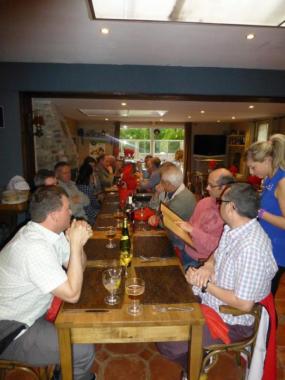 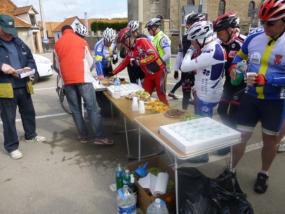 The Wheelers returned to Ardres after a 3-year gap to take part in the randonnées organised by the "L’association Les Amis Cyclos de l’Ardrésis". Rides of 25, 60, 100 and 140 km were on offer. Most picked the 60 and 100 versions - though Peter braved both the distance, broken spokes and a 6:30am start time to complete the 140km.  The weather, billed in advance as damp, gloomy and very windy, was much better than expected with a good deal of warm sunshine and the wind rarely a problem. The countryside around Ardres is like a grander version of Hertfordshire; longer and higher hills and wider vistas. There is much less traffic and, best of all for long-suffering Hertfordshire cyclists, mostly beautifully surfaced roads. Navigation was simple with all turns marked by arrows on the road. As before we were given a warm welcome by the local club. Our €3 entry fees bought us food and drink around the routes and free beer and sandwiches at the end - a great day all round. Travel to Ardres took a variety of forms; some driving, some combining train and bike. One group rode the whole way via Portsmouth, Caen, Dieppe and Boulougne - a tour of around 400 miles in five days. This group had a tough first day with a cold, wet ride into a head-wind over the south downs and an even colder wait whilst boarding the ferry. France was much kinder with three days of strong tail-winds and a good deal of sunshine. The country really is "cycle-friendly" and this was typified by an incident in the small town of Bolbec near Le Havre. Here Khan had the misfortune to puncture and break a spoke. It was a bank holiday with all shops closed and the town enjoying a fête. Nevertheless a café owner led us to a bike shop, found the owner and persuaded him into his overalls to do the repair - €17 including a new tube! Thanks to Richard we have an excellent photo compilation of the event.

Submitted 9 years 1 week ago by wheelt.
Next: Six Days in May >