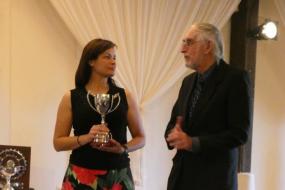 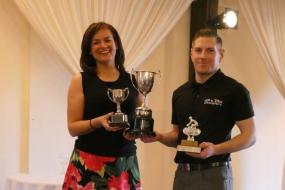 Forty-three Wheelers gathered on Sunday 28th Jan at Three Lakes, Ware for their annual lunch and awards ceremony. This event replaced the Xmas lunch scheduled for the 10th December which was cancelled due to snow.
The meal was enjoyed by all (as was the free bar at the start of the event). Gareth Wignall, the recipient of most of the racing awards, was unable to attend the lunch. Fortunately he was able to take time out of his work schedule in order to accept his awards.
Another award winner unable to attend was Bob Brown. Bob is the inaugural winner of the new "Pat Player" award. This trophy, named in honour of long-term member Pat who died last year. It is awarded to the member who, like Pat, has worked well beyond the call of duty to support the Club in the events it runs. Pat's husband Merv was present and thanked the Club for honouring Pat with this new trophy.
The Club is grateful to all who helped with re-organising the event, especially Marcia Carnegie, Peter Bloomfield and Mark Tappenden.