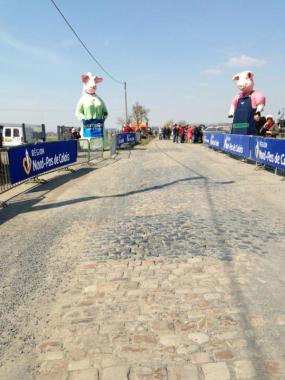 Six intrepid Wheelers and one partner assembled at St Pancras International on Sunday morning, long before the clubruns were beginning, eagerly looking forward to a day of cycle racing and, well, France. The participants were Bruno C, Steve Wh, Bob B, Valdis B, Jane P, Jason T and Jason’s partner Louisa.
Having ridden the Eurostar to Lille, tourmeister Bruno spent 15 minutes negotiating a special group deal on tickets to somewhere out in the sticks called Orchies. This haggling was well worth it as it saved a packet on the fare.
The planned venue having become a launderette, Bruno seamlessly slipped into Plan B, and led the party just down the road to secteur 12 of the cobbles. Alongside the cobbles was a very large tent showing the race live to approximately 300 seated fans and serving food and drink! This was all laid on by CC Orchies, the local cycling club, and is apparently a nice little earner for them each year.
With only about three hours to wait for the race to pass what else could they do than sample the fare? Bruno introduced them to a drink called Picon-Bier – a large slug of a strong drink called Picon topped with beer. With wonderful chips and salad available this was not bad at all for a temporary outdoor venue run by the club member!
The party inspected the cobbles very closely and confirmed them as truly evil. At around 3pm the race arrived. The lead vehicles seemed to have been placed strategically to kick up as much dust as possible to add to the riders’ torture as, by the time the first riders arrived, it was like a Saharan sandstorm!
When the lead group arrived, in the sandstorm and with helicopters hovering above, they hit the cobbles at about 25mph and it looked like it hurt! Sky rider Matt Hayman was in this leading group at this stage. Half a minute later the peleton disappeared into the sandstorm and in no time were gone. Many spectators went back into the tent to follow the race on  the big screen, but many stayed out on the roadside to applaud all of the racers - right until the very last ones had passed maybe half an hour later.
Settling down at the long trestle table with more Picon-bier the Wheelers watched the rest of the race. Spartacus won, as expected, but not without a mighty struggle to overcome Belgian Sep Vanmarke.
Bruno selected a bar/restaurant for the evening meal in Lille, and very nice it was too! Good Belgian beer (Afflighem or Pelforth), a nice bottle of Bordeaux  and steak and chips with a range of sauces for most. They then had a trouble-free ride back to St Pancras and were back indoors by 11pm.
A great day out, and thanks Bruno. Chapeau!
Many thanks to Bob B for the report and look out for the full version in the next Mudflap!

Submitted 8 years 5 days ago by wheelt.
< Previous: Xmas Dinner and Awards
Next: Reflections of the Ardres ... >