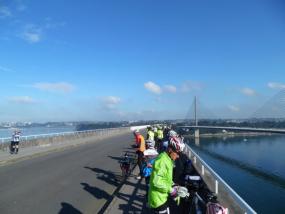 Congratulations to Peter Walton and Martin Wheeler who completed the 1200km Paris-Brest-Paris randonée on Thursday. They finished the ride in 88h08m, beating the cut-off time by nearly two hours.
This event has been part of the cycling calendar since 1891 when if was raced by professionals. They no longer race such gruelling distances so, since 1951, it is left for the amateurs. In order to qualify for the event Peter and Martin had to complete rides of 200km, 300km, 400km and 600km earlier in the year.

20:00 (Sunday).  It's kick-off time at last at the National Velodrome..
Superfast ride out into the wilderness as all traffic is stopped for us.
Middle of the night.  A thin stream of red tail-lights is all that can be seen for miles ahead.  Truly surreal.
02:00ish (Monday).  First stop at 140kms.
06:15.  Arrive at next control (220kms).
Then on to Fougeres, Tinteniac and get to Loudiac at 20:00 (Monday) 450kms.
Stopped at St Nicolas du Pelem (495kms) and got a whole hour's sleep.
Left at 04:15 (Tuesday), Martinless.
Got to Brest by 10:00, although it took over half an hour to get to the control.
Back to Loudiac, Martin & I having rejoined forces en route.
Slept for about four hours.
04:30 (Wednesday) Got going, albeit Martinless again.
A few miles short of Tinteniac a Russian rider had a severe accident on a descent.  Every spoke on his front wheel was broken.  He went to hospital.
Fougeres - 300 kms to go and 24 hours to do it.
See another rider by the side of the road getting CPR.  RIP.
Mortagne (Thursday) - 140kms to go and just short of 13 hours to do it.  But not enough time for a sleep!
About 75 kms from Paris and suffering badly from sleep deprivation.  Time & time again Martin saves me from myself as I momentarily fall asleep on the bike and leave the road.  Fortunately I didn't crash.  Getting back in time is my sole motivation.
Dreux - only 65kms to go and more than 5 hours to do it.  Provided that I could keep going there should be no question of not finishing within time.
Christ, there are some steep hills at Paris.
Back to the National Velodrome just after midday.
Two very happy bunnies.
All the volunteers at the Controls were wonderful.  Not the same could be said for the organisation of those controls.  Learned fairly quickly to "bounce" most of them and eat from cafes, many of which were open from about 4 or 5 in the morning.  Then there was also people all along the route offering food & drink (usually for free).  Surprised at the hundreds of riders who would just fall asleep by the side of the road, or in someone's garden, or just anywhere.
PW\MW.