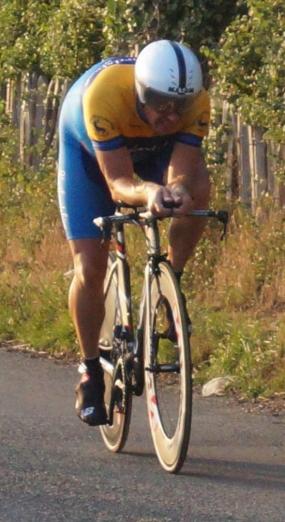 There were excellent results for the Wheelers competing in the Open 25 mile time-trial promoted by the Finsbury Park club. The race took place on the F1/25 course based at Tempsford on the A1. Despite what appeared to be calm and cold conditions to begin with, a gentle south-westerly breeze appeared and the temperature increased during the event which resulted in a harder return leg from Buckden Roundabout.
Nigel Hale, Karl Willis and Tony Marriott represented the Club. All posted strong times and all beat the hour:
Nigel Hale 54:32 (3rd on scratch - £30 prize)
Karl Willis 57:12 (17th)
Tony Marriott 59:42 (36th)
Their combined time of 2:51:26 won them second prize in the team competition (and £10 each). They were 2:14 behind the winners - TMG Horizon RT.
Nigel's time was enough to win him first place in the London North section of the event.