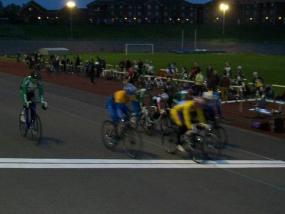 Brian and Tony raced again in conditions that were colder but less windy. Brian was reluctant to ride as he had been a bit under the weather for a few days but after cajoling from Tony he decided to get kitted up.
The scratch race was first up. Both rode a good tactical race and were well positioned into the last lap. Tony was 2nd going down the back straight when, like Usain Bolt, a gold and blue blur came flying past! Brian unleashed a fantastic sprint to go about 20m clear in the home straight with no one near and time to ease off!  A fantastic victory for Brian after three consecutive 2nd's and an emphatic victory. Tony held on to finish 3rd - a great advert for the club to have two riders placing in this event.
The second race was an odd/even pursuit with Brian and Tony on opposite sides of the track. It was nip and tuck until the last two laps when the evens (Brian's) team were up so they took the league points but neither scored individual points.
Next up was the "devil". With a large field two riders were eliminated every lap. This was Tony's first time riding this event and it was " a little more hairy than I had experienced so far with some really close-quarter riding -  but great fun ". Brian managed 8th and Tony contested the final lap finishing 5th - but, sadly, nul point.
To end the evening there was a 10 miler with the A riders. The pace was good from the start and Brian again showed his lightning turn of speed to grab a prime. He lasted another few laps then retired. Tony felt fairly comfortable and as the pace quickened the field whittled down until the bell and the pace upped. He was happy to finish 7th - the first time he had completed this event.
This was a great showing from both riders, especially from Brian who gained his first victory for 5 years and his first in the Wheelers' colours.