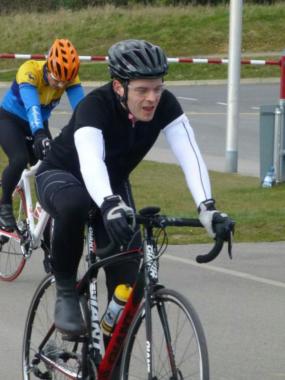 Three Wheelers rode this event; Brian Evans, Richard Clark and Spencer Stratford. Congratulations to Richard and Spencer who both got their first individual open TT under their belts .
Brian did a did a 1:04:17, Spencer a 1:08:48 despite a crash (see below) and Richard a 1:10:31 (on a road bike without TT bars).
Many thanks to Spencer for this account of his ride:
"Despite being handed starting position 13 the day started well when the race circuit element of the course was dropped due to ice danger. Whilst it threw my pre race calculations and Garmin course navigation the decrease in miles was a real lift. It also meant that the race marshals needed to be  re deployed and the start times were moved back by 30 minutes. My new start time meant I got to see Richard Clark, it was great to see a face I new amongst the semi pros who seemed to have the best sponsored kit and had all brought their turbo trainers to warm up. Arriving at the start line I asked the guy to hold me while I clipped in – he promptly dropped me – comical start only avoided due to actually not managing to clip in quickly. Richard shook my hand and then the count down began.
About 10 minutes in I saw a bunched group of 3 riders ahead and suddenly started to think that TT were pretty easy – as I got onto their back I realised it was group of mates just out on a spin… In fact there were only 2 people ahead of me – I passed the first after 15 minutes and the guy in front of him came close to the winning time so no chance of a double take over.
Race itself was pretty good, one very tough hill after about 10 miles and few other short hills but also some very nice flattish sections that were just superb to ride at a flat out pace (speeding past snow gave it it all a slightly surreal feel).
At about 20 miles I thought the finish would be in sight (with the change in distance I was told the course length was about 20 miles) – it was actually 22 so I went a bit early. Still managing to keep some pace along a flat there was an approaching left with a marshal and a photographer – wanting to give it the full effect for the camera I kept my pace into the corner – hit some ice then gravel and the back wheel went from under me. Having skidded along the tarmac I got up – I righted the handle bars while the marshal put the chain on – I then righted the brake hoods and set off again. In a bit of pain I pushed up the last hill and thankfully the chequered board.
I did a 1.08.48 averaging around 19mph – up until the crash my avg was around 20.2mph – so all in all I was pretty happy with the effort – the only worry was I wasn’t on the verge of throwing up at the end so might not have pushed it enough!
We were actually pretty lucky with the weather – it was cold but it was bright and the Sun actually popped out. I got my cup of tea and was patched up by the first aider on hand – all of which meant I was there still when Richard finished. Despite riding on his road bike with no tri bars he did a respectable 1.10.31 but was disappointed he hadn’t used his TT bike and felt he could of gone a lot faster.
We didn’t see Brian as his start time was a lot later but he did a very good  1.04.17."