Six Days in May

Six Days in May 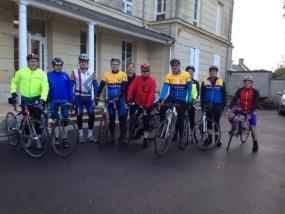 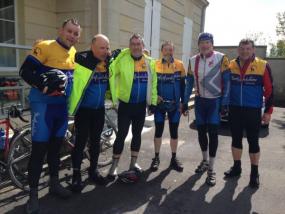 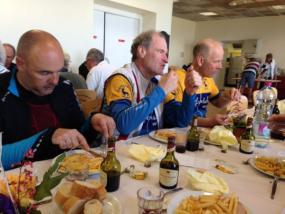 Four (PW, PL, BP and GK) started before 6:00am on the Wednesday morning for the ride to Portsmouth. The route is becoming familiar; a bit dour until Windsor then some glorious countryside (with rain) over the downs. JT and LA joined at Portsmouth and, this year, we were able to board the ferry early and get showered in plenty of time for food and drink.
Once we had recovered from that Peter's chosen route took us on 100k stages: St Malo - Avranches - Carentan - Ouistreham. These were nice, manageable distances (with generally helpful winds) with rides ending at about 6:00pm each day. Highlights included a visit to Le Mont St-Michel (in a drenching gale), a 25% climb to the hotel in Avranches, an encounter with the Tour de la Manche bike race and lots of very pretty cows. We enjoyed good food and drink and especially appreciated the restaurant in Oiustreham who had contrived a menu structure that seemed to ensure that the only way of getting a cheese course was not to order it.
On the Saturday, en route to Ouistreham we stopped for lunch in Bayeux where we were joined by RH and SMc who had crossed on the overnight ferry. The final Sunday took us to the Randonée Des Huitres. In principle this should have been something like an audax in the UK. In practice, and perhaps reflecting cultural imperatives, it was a lunch preceded by an optional bike ride. The eight Wheelers were joined by two French vets who seemed happy to lead us round the 100k parcours. We did try to get on the front occasionally but, well, we wouldn't have wanted to have dropped them would we? (Actually we suspect they would happily have gone a couple of mph faster).
That just left the lunch complete with lashings of chips and "Calvados du Maison" - a happy occasion complete with entente cordiale, bonhomie etc. That just left a slightly sketchy 3 miles back to the ferry port.
Return from Portsmouth was mainly by car but PW and BP achieved hero status by riding home making for a plus 500 mile round trip.