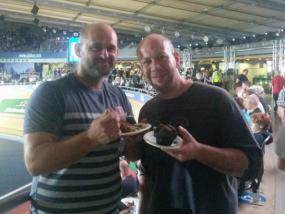 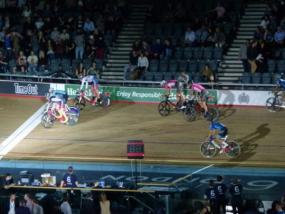 Mark T not only organised the whole trip but also hired and drove a mini-bus to take most of the participants down to London. The seats in the Velodrome were excellent; opposite the start finish line and with an uninterrupted view of the whole track.
The schedule for the evening interleaved three events; the Women's Omnium, the Sprinters competition and the main Six-Day London competition. All provided close racing with plenty of changes of lead and results in doubt until the line. There was plenty of noise both from the crowd and from the sound system (the latter a mixed blessing for some).
The main Six-Day event began with two Belgian pairs in the lead; Kenny De Ketele and Moreno De Pauw on 161 points ahead of Iljo Keisse and Gijs van Hoecke on 142. The British pairing of Chris Latham and Ollie Wood Ollie were on 136 points but a lap down. The story of the evening was of Latham/Wood gradually climbing towards the lead. They were 1st in the Long Lap (a strange event involving a mass track stand followed by a sprint), 2nd in the 20k Madison, 1st in the Team Elimination and 1st - setting off last and to tumultuous applause - in the 500m Madison Time trial.
This put Latham/Wood on 204 points. Crossing the 200 point boundary gained them a bonus lap so they now had the lead going in to the final Madison Chase. During this the lead continually swapped between Latham/Wood and De Ketele/De Pauw as each pairing gained laps and scored sprint points. At the start of the final lap Latham/Wood had a narrow lead but were pipped on the line by De Ketele/De Pauw who won the Chase and the overall.
Mark then drove us all home before delivering the bus back to its home in Loughton. A long evening for him and a great one for all the participants.