Reflections of the Ardres Tour

Reflections of the Ardres Tour

Richard H gives the full story of what it was like to do the 400 mile, 5 day trip. 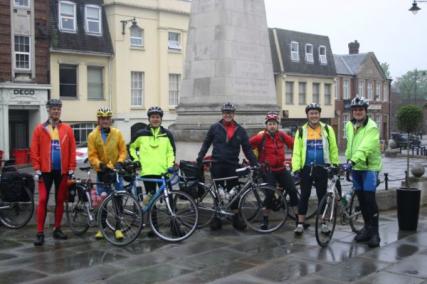 Setting off from Hertford

After months of planning, the day arrived when 8 wheelers gathered in Hertford outside Café Rouge for the send off to Portsmouth.  The hardy group of Khan, Alex, Peter, Steve, Richard H, Barry and Jason were seen off by Simon and Anne, plus Brian Hill who rode with us all the way to West Street before peeling off – part of his endurance training regime to prepare for the Audax in Ardres.  The morning ride was fairly uneventful especially compared to the last trip to Portsmouth where we barely made it out of Hertford before the first breakdown.  We rode up Brickendon Hill and over to Brookmans Park where we met Graham waiting patiently at a bus stop.  Now at our full compliment we rode well over the motorways through Radlett, Watford and Denham village.  The group split briefly before lunch Richard, Jason and Alex in the lead group turned left and the rest turned right, but regrouped at the Datchett café lunch stop at 11:30. We saw the sights of Windsor (and the first of several dead ends) before heading west along the aptly named 9 mile drive to Hartley Witney for an afternoon break where the village bakery sold very good sausage rolls.  Turning south we reached Alton for a refreshment break before the slog of the day to Petersfield and South Harting into a headwind and miserable rain.  Alex, Steve and Graham made it up the 15% hill out of South Harting (respect!!), Peter’s front wheel lifted off the ground before a minor fall, and the rest of us walked.  One more steep hill towards Rowlands Castle and then downhill all the way to Portsmouth with only a slight detour on the cycle paths before reaching the ferry port at 8 ish.  Life was almost good, as we only had to endure 45 mins on the harbor side waiting to board.  Top tip:  cabins are worth every penny.  Great showers, comfortable beds and good sleep was enjoyed by half of us after a few beers and food in the self service. 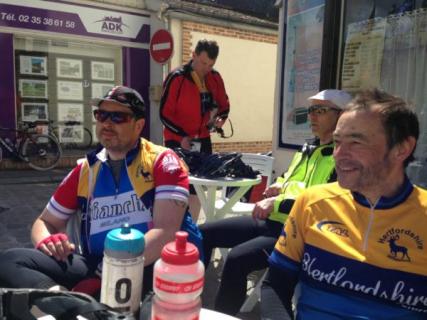 Enjoying the sun in Bolbec

Early call from the ferry crew:  a couple of us had breakfast on the ferry before docking, then after clearing customs (there’s always one person with a troublesome passport, not mentioning any Americans here….) we rode all of 1 km before an open café was spotted and we all piled in for croissant, coffee and orange juice.  The riders were in good spirits heading out of Ouistreham turning north east and feeling the wind behind us with the blue sky and good roads.  The morning turned out to be a bit of a stop start ride as we swooped into coastal towns to be greeted by traffic and other miscellaneous stops, which slowed progress.  We ticked off the towns, Cabourg, Houlgate, Villers-sur-Mer, Deauville finally reaching Honfleur our designated lunch stop at 11:30.  The restaurant with a lovely view did not open until twelve, so we had a little aperitif before realizing that we did not have to have a menu de jour, but could have a sandwich and chips.  We headed out to cross the Pont du Normandie, which Bruno had warned could be a little hairy, because it was a cycle lane in the hard shoulder of a 3-lane motorway.  Luckily it was a bank holiday in France, so no trucks and only light traffic were on the bridge so we got stunning views of the mouth of the Seine as we crossed.  We had a flat bit afterwards in a nature reserve before the big climb of the day (110m).  Richard realized at this point that his gears weren’t meant for hill climbing (either that or he’s just rubbish at big hills).  At the top of the hill however, he could go fast on the flat and the group started to gather pace.  Disaster struck after a little while as we descended into Bolbec.  The first mechanical when Khan said he had a slow puncture.  There was a bit of a groan and several folk went to find a nice café to sit down, when Khan was actually diagnosed with a broken spoke as well.  Peter came to the rescue, finding a bike shop and a willing Frenchman to repair Khan’s bike in the midst of a bustling town market.  The group enjoyed sandwiches, a sneaky Kronenbourg and custard tarts sitting in the sun watching pensioner road rage amongst other sights. Once all was fixed and ready, we got our heads down and rode hard for the last 40 miles with the wind behind us, taking some pleasure in the good surfaces and empty roads.  All was good until we reached Dieppe.  The French do love building their coastal towns at the top of hills!!  We got into the Formula 1 for about 7:30 where after a shower we found the gourmet restaurant Pirate Jacques (upper floor of a soft play).   Valdis joined the group here, having travelled to Newhaven with his precious Russian visa secured and in place for his marathon tour to the Baltic.  Jason and Steve nearly passed out waiting for beer and food such was the speed of the service, only to be rescued by Graham ordering tapas as a starter for everyone (other starters were off).  The hotel was cheap but there was a general agreement that 8 out of 10 wheelers prefer hotels where the bathroom is attached to the room not down the corridor…. 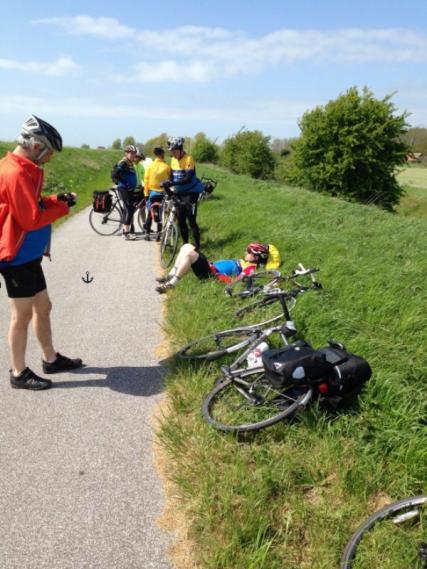 Formula 1’s do a very good breakfast for only 4 euro.  Endless coffee, cereals, yoghurt, bread and juice, really good value. We aimed to depart by 10am and headed down the hill into Dieppe proper, only to head straight back up a hill to get out of it (mustn’t grumble but I did).  We followed a coastal road to Criel-sur-Mer (coffee stop) and Le Treport, before passing the town with the shortest name in Europe, Eu (thanks for the fast fact Graham).  Up another big hill and onward to St Valery Sur Somme for a late lunch.  It was heaving as it was a holiday weekend, but we found a café eventually near the memorial to William the Conqueror who sailed from here to invade England (Battle of Hastings 1066 – here ends the history lesson).  We rode around the bay of the mouth of the Somme and had a bit of a slog with the side wind for 40 mins or so and only the second puncture of the trip (Graham).  This was the part of the trip when we rode on or next to major roads so it wasn’t that enjoyable or memorable compared to the previous day and a half.  A coffee / beer stop in Etaples then the last hour into Boulogne back to the hotel Gens du Mar to be greeted by Paul and Amanda.  Some folk ate in the hotel, and a few wandered across the river to a different restaurant, but we all slept well.

Khan said goodbye and thanks to everyone as he had to head home.  320 miles in three days is no small feat.  Well done Khan, back for more next year Valdis had a 40 mile route planned to take him past Ardres and back to help him get some training in.  We all joined him apart from Paul and Amanda who wisely drove to Ardres.  This was a tough day, because I was knackered.  So we took 2½ hrs to ride only 29 miles, getting caught in the rain and having a cafe stop as well.  We rode into Ardes and went to La Taverna de la Kate for pizza and a few beers before Peter revealed the hotels we were going to stay in.  One hotel had hot water and served breakfast.  I was in the other one. More jolly wheelers arrived on the Saturday afternoon (Brian, Simon, Bruno, Danny, Jane) and we celebrated with aperitifs back in Kate’s then a lovely meal at La Taverne du Roy where steaks were eaten, red and white wine was quaffed and an enjoyable evening was had by all. 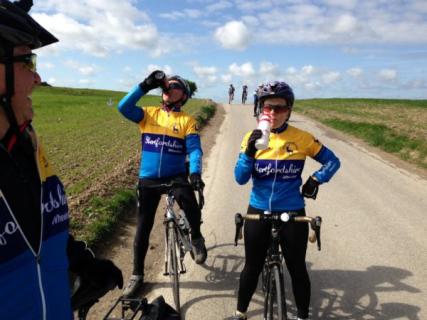 Peter left really early to do the 200k audax.  Everyone else headed to the start for 8 am (some with breakfast inside, some without).  Graham, Barry, Alex, Brian, Valdis and Jason rode the 100k.  Danny, Jane, Paul, Amanda, Bruno, Simon, Steve and Richard rode the 60k.  Steve and Richard were riding slower than the slow ride owing to lack of food for the first 30k.  Nice morning, up a couple of really big hills, generally not feeling very good until we reached the feed station.  Food. Mmmm.  Cake. Chocolate.  Mmmm.  Orange juice, mmm.  Minty green drink….well I’ll reserve judgement on that.  Short sharp very steep hill straight after the feed station, starting to feel good.  Fast group of local riders…Simon, Steve and Richard latched on and raced.  Really good last 30k and fast.  Back to Ardres for a sandwich and a beer.  Other wheelers from the 60k arrived after 10 or 15 mins and enjoyed the local hospitality. Steve and Richard made a break for it, there was a ferry calling.  We had a good ride to Calais and boarded the 15:20 ferry where there was a filling curry and beer to be eaten.  A few texts later we discovered Jason and the gang were also on the ferry…the 16:00, so we couldn’t join them.  In Dover we were the last off the ferry and we negotiated the way out of the port with the help of a harbor employee as the gate for cyclists wouldn’t open.  A dash to the station meant we got on the train with less than a minute to spare, with no time to bother with troublesome details like collecting tickets from the machines.  The guard was relaxed as we had reservations, saying just get your ticket in London.  We realized we wouldn’t get decent connections in St Pancras, so we got out at Stratford International.  Unlike the later group we were challenged as we entered Westfield, so had to go back out and round the outside to the tube station and we had to take a train into Liverpool Street to go back north to Ware arriving at home at 7:15 pm.  Exhausted.

It took me a week to recover properly from the cumulative exhaustion of the trip, and I still have twinges in my right shoulder from carrying a light backpack.  We rode 400 miles in 5 days.  Some rode further (yes Jason, those extra few miles from Harlow make all the difference) and some came only for the weekend.  We all grumble during the trip and have a good moan, but that’s what makes these trips enjoyable.  How was it for everyone?  Training rides with panniers is the best description I think.  But still there was a lot of organization and planning went into it by Peter and as a club we have now done 4 french trips in 4 years, with each one a bit more ambitious than the last – all organized by Peter. So only one thing remains to ask.  Next year?? Richard H

Submitted 8 years 12 months ago by wheelt.
< Previous: Wheelers hit the cobbles! ...
Next: Six Days in May >