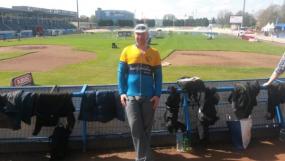 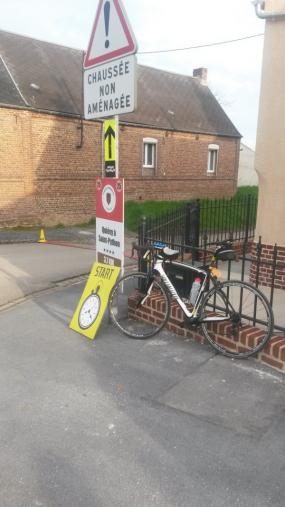 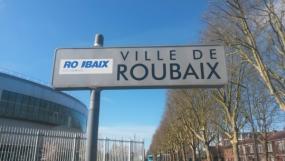 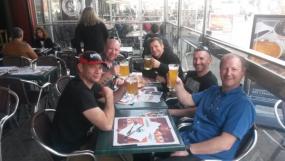 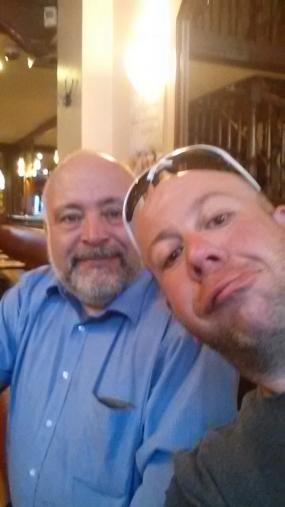 Mark reports on an epic trip and an amazing ride across all the cobbled sectors of the Paris-Roubaix race course.
Day one started with an early call at 6am and we were riding by 7am. We had to be in Dover and on the ferry to France by 4pm and, with a mixed group of 16 riders, no one knew what kind of ability people could ride at. We headed off from Croydon towards Kent and through Otford, just north of Seven Oaks, then Ivy Hatch, Cox Heath and eventually into Dover through the North Downs. Why the North Downs is called the North Downs is beyond me when all we seemed to be doing was climbing. Over 6000ft of elevation made made for a tough first day, but we all made good time, even though one person had a puncture and someone else broke their chain. That was soon mended by one of the support crew who was driving behind us all the way with ample spare parts and who was a awesome bike mechanic.
We made the port of Dover with over an hour to spare so had a well deserved rest and dinner on the ferry. By the time we got to France it was night time but we only had a 7 mile ride to our hotel. I was a little bit apprehensive about riding on the right as it was the first time I had ever ridden a bike in a different country and I felt a little out of my comfort zone. However, the roads were almost empty and our support crew stuck with us all the time. So, day one was done and the almost 100 miles ridden made for a good nights sleep.
Day two started a little later than day one as we didn't have the pressure of having to get to a ferry port. So, we were all up at 7am and set off at 8am with bright sunshine. This, together with the flat, good quality roads made for the most enjoyable ride I think I've ever done. The French drivers seemed to be as polite and courteous as I have ever experienced. Even when coming to roundabouts they would stop and give way. They wouldn't over-take unless they knew it was safe and then gave us plenty of room - unlike back in the UK.
We headed east though Watten, Cassel, Hazebrouck and, eventually, Lille. We stopped along the way at some very picturesque French villages for light refreshments and visited an old British WW1 cemetery for a bit of reflection time and to pay our respects. With the good quality roads and good weather we made excellent time and were at Lille at around 4pm, so we had time to shower, change and have some free time before dinner that evening. Our support crew didn't stop; they serviced all our bikes and changed wheels and tyres for those of us who had brought them, making sure we all had the best possible chance of completing the Paris Roubaix sportive the following day.
Day three started very early! We got up at 3am to load our bikes and catch our coach by 5 am at the velodrome in Roubaix. Eventually we set off to the start of the sportive at Busigny and began the ride. We headed north and the first 9 miles was good, flat and fast until we came to the first sector of cobbles. Just before I got to them I gritted my teeth and hoped for the best but as soon as I got on them I lost a water bottle and, somewhere else, I lost a rear light from my saddle bag. I got through it though and was pleased with myself. Eventually, after about 7 cobble sectors, I started to feel it; my hand was hurting and I was dreading seeing another sector. Each cobbled sector was littered with water bottles, saddle bags, inner tubes, gloves and even water bottles still in there cages! Then, just before 50 miles I got to the one of the worst sectors, the trench, where I made my first mistake. After completing it I missed an arrow and carried straight on - which brought me round in a big circle and back to the trench losing time and gaining almost 10 miles on my ride! As the velodrome closed at six pm I didn't have much time for stopping at feed stations  - only enough to fill my one remaining water bottle and put a little food in my back pockets. After trying hard to make up time I got to the velodrome with 5 minutes to spare and completed a circle of the track to get my medal.
I was ecstatic with joy that I had made it! That evening we all had a celebratory meal and some banter - especially with me going wrong at the trench having to do it twice - but we had all completed the Paris Roubaix and got our medals and had a great time. The weather was excellent for the whole time we were in France and we couldn't have asked for more.
Our last day was spent the in the Roubaix velodrome to see how the pro riders do it. I don't think I would ever do it again but would recommend anyone to do it just once for the experience . It was the best 3 days riding I have ever done by a long way.