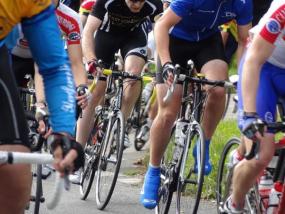 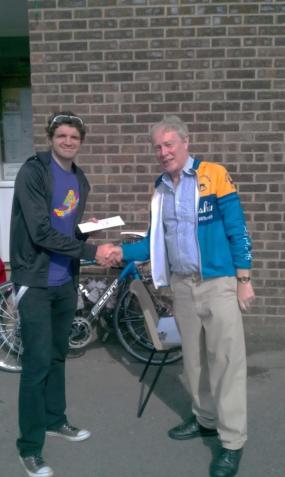 A warm day with a southerly breeze could surely not have been the reason for 18 of the 70 riders named on the start sheet failing to sign on. However, those who did show, including 5 of the reserves and another 8 entries on the line, had a fine morning for the race. Campbell Noon (Team Virgin Active) was the first to break away, on his own, in the first lap. John Peters (CC Luton) caught him at the end of lap 2, but was soon dropped. Noon then gained a lead of 20 seconds that stretched to 50 sec. by lap 2 when two other riders chased out of the peleton to form a 3 man break on the 3rd lap. But this was short-lived and the bunch was altogether again by lap 4. In the 5th lap another trio broke away from the peleton. Noon was again the main stirrer and took with him Lubomir Belak (Welwyn Whlrs) and Stephen Nunn (Arctic RT).

Shortly after, another 3 riders joined the break: Digby Symons (Cambridge CC), Dave Robinson (CC Ashwell) and Gonzalo Rodriguez (East London Velo). By lap 6 the lead group had gathered another 8 riders and these 14 were chased by yet another 3, but this break fragmented yet again to leave what could have been the final group to contest the finishing sprint at the end of lap 7. This group of 11 comprised the six riders named above with James Wilson (Banjo Cycles), Toby Parnell (Cambridge University CC), Chris Hughes (Cambridge CC), Darren Cainey (East London Velo) and Nigel Stephens (Finchley RT).

They gained a clear 30 second gap on the peloton. However, as the lead group sped through Langley for the last time, there was a wheel-touching crash and five riders at the rear of the break were brought down. Two were clearly injured * and the other three (two with grazes, one unhurt) stopped to assist and all failed to finish. The remaining six were unaffected and continued racing. Belak, Noon, Parnell, Rodriguez, Stephens and Wilson fought it out over the St Pauls Walden hill and along the twisting lumpy lane from Whitwell to the finish. Stephens was dropped by the last mile and Parnell seized the initiative to jump ahead. Wilson gave chase and overhauled Parnell to cross the line first.

The race seemed slower than previous years, possibly because most of the early breaks proved unsuccessful. The lap times were consistently between 22.20 and 22.55. Primes on laps 2 and 3 went to John Peters and James Wilson, while the prime at the end of the first lap and those for laps 4, 5 and 6 were all won by Campbell Noon.

The injured riders were swiftly attended to by our paramedic teams. Stephen Nunn had suffered numerous cuts and abrasions to his right shoulder and knee and he was brought back to the HQ for more extensive patching up, but he was OK to make his way home. Chris Hughes’ injuries involved a painful left wrist and lower back and appeared more serious, so he was taken to the Lister hospital at Stevenage by the 2nd ambulance crew, who we were fortunate enough to have had in attendance for most of the race. But we had news later that Chris’ injuries were not as bad as first thought and he was allowed home on Sunday afternoon.