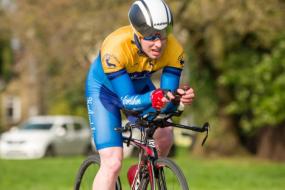 As a result of their consistently fast riding Gareth Wignall (90 points), Sam Ball (75 points) and Barry Page (72 points) finished first, second and third in the Wheelers summer time trial league, runaway winner Wignall topping every round he rode in (he missed only one round, when he suffered a broken chain before the start). The only other club members to contest at least five rounds were Lee Mason (46 pts), Peter Walton (42 pts) and Paul Milner (35 pts). Club Racing Secretary Wignall said “at the end of a fraught season in which we eventually managed to run all ten rounds my thanks go to all the riders who have taken part and even more so to the club members who have given their time to assist with organising the events, particularly club timekeeper Bob Brown who has been there for every round, without people like these the club’s league would not take place”.