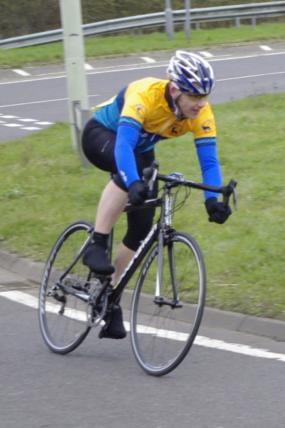 After a 22 year interlude Tony Marriott returned to bunch racing in a Ford Cycling Club event on 26th July. The race was one of a series of 1 hour Cat 4 and Novice races on the Ford Test Track at Dunton near Basildon.
Tony thought he had won a prime only to find out at the end that someone had been off the front! At the finish he contested the sprint until about 200 metres to go then "POP". Maybe he had a crystal ball as two riders collided at the front and he managed to swerve round them to finish 14th out of 38 starters.
The race was won by Mick Bath of API-Metrow.