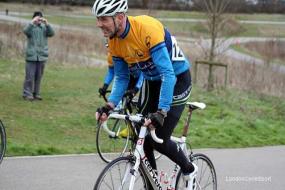 Tony Marriott and Nick Cramer raced at Hog Hill (Redbridge Cycling Centre) on Saturday 16th in the final event of the East London Vélo "Six days of winter" series. This was a circuit race lasting an hour.
This was Nick and Tony's first race of the year, which they entered for fun and to test their fitness prior to the racing season starting. (Their first road race will be around the end of March or early April). They started off well but got dropped from the pack half an hour into the race. Both finished the race but some half to three quarters of a lap behind the pack. As the race was only an hour long it was full on and very fast - nothing like the previous road races they had entered!
Nick said " We were very glad to cross the finish line as we were proper blowing! Back to the drawing board for a bit more weight loss and to sling out some 'junk training miles' for some quality miles!" However, despite the stress of the event, both had an enjoyable day with the sunny weather playing a big part.