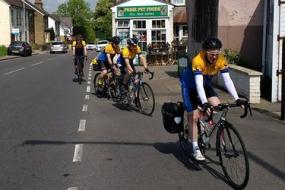 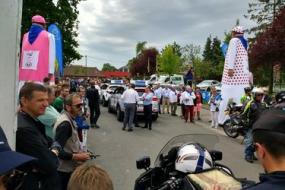 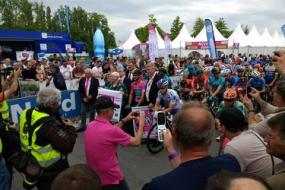 Weds 09/05/18 - After months of talking about it, prevarication, planning it and more talking about it we finally set off for France.  Two met in Hertford at 09:30 and on our way to Tilbury met two more at Ware, one at Cheshunt and two more at Chadwell Heath.  After crossing the Thames on the Tilbury Ferry, we headed towards Canterbury via the old A2 (80miles).  We stayed the night at the YHA where much to our surprise there wasn't much yoof.
Thurs 10/05/18 - After a wet start we soon got to Dover (20miles) in sunshine and met up with another three.  Ferry time, then a short trip to Dunkerque (30miles).  As most of us did not have high expectations of the hotel, it did not disappoint!
Fri 11/05/18 - We decided to go to Ypres.  After much poring over a map we chose a route, but then had to go find it.  Eventually success, and we arrived in Ypres with the minimum of fuss.  Got back to Dunkerque (68miles).
Sat 12/05/18 - Went to Wormhout for the start of the 5th Stage of the Quatre Jours de Dunkerque.  The group eventually split as three went searching for another chance to see the race whilst the remainder went back to the Hotel and a chance to wander/explore the town (40miles).
Sun 13/05/18 - Two of us left at 05:35 to get to Ardres for the Carre des Vallees (100kms Audax).  The remainder left at about 08:00 to get to Calais.  The magnificent two did 102 miles, whilst the others didn't.  Most got the train back from Dover, with most of home by 20:00.  PW.
+++++++++++++++++++++++++++++++++++++++++++++++++++++++++++
This was a really enjoyable mini tour!  We all seemed to hit it off well and managed to agree on three evening restaurants without coming to blows.
Once I had got over the shock of riding up Avey Lane hill with luggage (they waited for me) the ride down to Canterbury went quite smoothly.  If nothing else if illustrated just how many traffic lights there are in the UK - how was it that Peter W always managed to get through just before the lights turned red for the rest of us?  The youth hostel (youths? us?) at Canterbury was excellent value; modern, very well appointed complete with a drying room that got my washing dry ready for the start next day.
We had a great ride to Ypres; virtually flat with excellent road surfaces.  Once we had crossed the literally imperceptible border into Belgium we had the benefit of Dutch-style cycle paths - wide enough to ride two-abreast, beautiful surfaces and priority over traffic coming from side roads.  Time for a nice meal in Ypres but not for much else, a pity but several have vowed to return.  We did manage to see the Menin gate - a moving experience for all.
At Barry's suggestion we saw the start of the 5th (really!) stage of the Four days of Dunkirk cycle race.  Lots of typically French razzmatazz, giant team buses and lots of seriously expensive bikes. Apparently André Greipel won the stage.
For some reason I wasn't attracted by PeterW's 05:35 start and had a more leisurely ride back to Calais then ferry and train. GK.
+++++++++++++++++++++++++++++++++++++++++++++++++++++++++++
My first cycle tour and I still left the preparations to the last two days!  Still the old rack from my mountain bike fitted (with slight modification) and with one pannier and a rack bag I had enough luggage capacity (don't take too much everyone warned, you've got to pedal it up the hills!).
Starting from Enfield I met the Hertfordshire contingent at Chigwell Row in brilliant sunshine which luckily was to stay with us until the last morning.  Peter Walton's preparations were thorough and he guided us without a hitch down to Canterbury for our first overnight stop.  On to Dover the next morning where the group grew to ten and after the ferry trip we enjoyed a relaxed ride through the flat countryside from Calais to Dunkerque.
Others have described the trips we enjoyed whilst we were there so I shall comment on the fact that the food (and beer and wine) and company added perfectly to the cycling to make for a very satisfying and sociable few days away.  Spending the days riding with a destination in mind was new and pleasant - I could get used to this touring lark!  Watching the start of the Wormhout stage of the Four day of Dunkerque was great fun so thanks to Barry for spotting that it was on.
As a touring newbie I would encourage anyone to give it a go, particularly in a group for support and maybe a short trip like this one to start (and even better if someone else does the organising - thanks Peter!).  It needn't be hard work and it makes a change from bashing the lanes of Hertfordshire & Essex.  I'll be back.  PB.