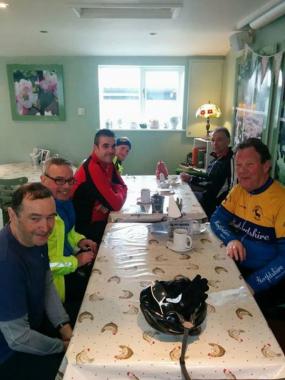 Seven Wheelers, including those who turned up expecting a Cat 3, set off from Allenburys at the advertised 09.30, wondering where Barry was. Up the old A10 to High Cross, brushing aside the ascent of the hill to High Cross as if it wasn’t there, the peleton then turned into a particularly muddy Marshall’s  Lane and headed for  Sacombe Green, Dane End and Great Munden. Captain Bob did offer the option of taking the route via Haultwick, but there was no enthusiasm for this, so via Great Munden Church it was.
We were the only customers at a deserted Church Farm, so we quickly got our refreshments and were ready to roll again. This was one of the slowest Cat 6 rides on record, with no excuses for punctures or mechanicals. Several members were convinced that it was down to the roads being “sticky”.
As we were leaving Peter W’s Cat 5 out of Hertford arrived. Mr GW decided to jump ship and join Peter, whilst Alex made the opposite move. In view of the near certain threat of rain, the group decided to head more or less straight back home . This was achieved via a return to Great Munden, down to Puckeridge and then down the old A10 back to Ware.
With riders peeling off at various pointe en-route, only ride leader Captain Bob and award winning Cube Danny actually finished the ride at Allenburys.

Two of us set out from Hertford in order to sample the delights of Ardeley.  But we took a long route via Datchworth, Nup End, the new(ish) super-highway to St Paul's Warden, Almshoe, Graveley, Hall's Green - 29 miles.  As stated above we were met by the happy-smiling faces of the Groups 3 & 6, but not by Barry who had suffered a mechanical on his way to the start.  Weather wasn't bad but we had been promised rain by about midday.  After chewing the cud in the cafe with GW for a few minutes we left to find that we would be going home via Watton in torrential rain.  However it was a fairly quick journey and not too cold.