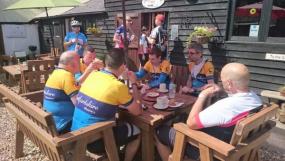 Cat 5 led by Ian S
5 riders including 2 Guests rode to Hare Street via Hunsdon, Bishops Stortford, Berden and Brent Pelham. Sat in the garden for a pleasant break in the sunshine before returning to Ware by way of Westmill, Great Munden, Standon and Dowsetts Lane, deciding to avoid the intended route through Barwick Ford because of potential traffic chaos due to a music festival. 42 miles at a brisk pace in lovely weather.
Cat 6 led by Bob B
Oh, the shame of it! Capt Bob got lost! Well almost. Attempting a non-standard route to Emily's he missed a turn, but the intrepid sixers egged him on to ride into the unknown. A couple of friendly cops (well friendly to us, they were clocking speeding motorists with a radar gun) pointed us in the direction of Preston and we were back on track. Everything turned out perfectly at Emily's and we had the pick of the cakes before hordes of other cyclists turned up.
The return to Hertford was completely uneventful until Martin got stung twice by a wasp - it hit him on the helmet, fell down into his unzipped top and stung him twice trying to get out.
Cat 8 (off road) by John F
5 Wheelers assembled at Stow cum Quy for our annual meander across the Fens to Ely via the Lodes Way, minor roads and along the banks of the River Great Ouse.
The only hill of the day up to Ely Cathedral provided the setting for the King/Queen of the Mountains competition which was easily won by a certain C. Parker, showing off the fitness acquired on her recent coast to coast trip. The Tea For Two café provided an early lunch before we descended back to the riverbank for a slightly different return leg which happened to involve an afternoon tea stop at Wicken Fen.
The long promised cyclist friendly new bridge over Burwell Lode has still not materialised and negotiation of the steps on the existing bridge nearly involved the dropping of some very expensive mountain bikes. Once safely across we made our way back to Stow in pleasant afternoon sunshine without any further incidents. 36 miles.