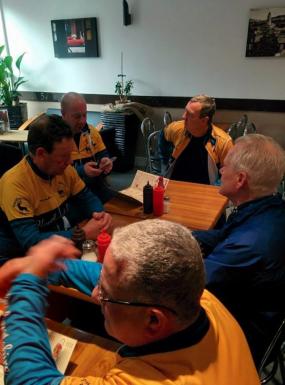 Mike led the Cat 6 run: " A group of 15 that used to be the easies - how times were so much simpler then, before we just became a number - meandered to and from Bishops Stortford, enjoying a short but calorie filled sojourn at the Mocha Cafe. The Gatorskins behaved themselves today, and there were no mechanicals. A minor collision between two members unseated one, but there was no lasting damage. Great to have Lee back cycling again after his recent misfortunes. "
Ian led " an ideally sized group of 7 " to the misty heights of North Herts via  Hunsdon, Standon, Furneux Pelham and Wydial to the Buntingford Coffee Shop where they had to sit outside, which was no hardship on a calm and not overly cold day. They returned to Ware via Westmill and High Cross. Only one puncture (on Bromley Lane), despite wet and mucky lanes.
Peter led 8 on the Cat 3 run to Clavering Lakes. They suffered a bit from the cold and a few punctures but adjudged it a " good 50 miler ".
The training ride had it's first outing without Clive. They divided into two groups and did not get lost but were not quite so well organised when left to their own devices!