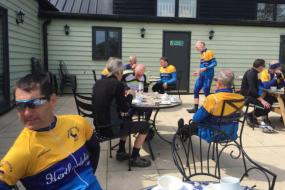 Cat 3 run led by Peter B
It all started so well… (if you haven’t seen Facebook you’ll have to wait a bit to find out what happened).  On a fine sunny day sixteen set out for The Blue Egg and had a good run out there, the prevailing tailwind making us feel we were pretty good!  It was great to finally have a properly sunny ride with reasonable temperatures and no threat of rain at all.  On the way back the wind was now (of course) a headwind and varying levels of fitness coupled with traffic conditions and a puncture contrived to split up the group into a number of smaller units which occasionally met then separated along the way.  Riders’ routes home took them away, reducing numbers further.  Eventually three were heading back into Ware, then there were two, then disaster!  -  a touch of wheels on Wadesmill Road on the approach to the big roundabout at the bottom of the hill resulted in Danny North crashing to the tarmac.  Luckily the car behind stopped in time and soon along were two off-duty police officers who managed things very capably until the paramedic arrived.  An ambulance wasn’t far behind and after carrying out initial checks and patching Danny up they took him to Harlow A&E.  At the time of writing (Sunday evening) Danny is back home, no doubt bruised, battered and bloody but otherwise mobile and ready to banter (this is the man who, while he was lying in the road covered in blood asked the paramedic if he’d be fit to do his Mr Universe competition by Tuesday!).  A sad way to end what was otherwise a great day out but apparently no major injuries (and the bike’s not too bad either!), so get well soon Danny and we’ll see you out on the Cat 3 when you’re fit again.

Cat 6 run led by Mike E
Well done, James Callaghan. For younger members, he was the Labour Prime Minister in the late 1970s. In between dealing with crises (What Crises!) of those turbulent times, he introduced the May Day Bank Holiday in 1978, allowing British workers to unite with those across the world, or, more likely, to let the huddled masses become the addled masses on a Sunday evening, without having to get up for work on Monday. Twelve riders assembled at Ware to build up a thirst for that Sunday evening bacchanalia. The group included Steve and Lesley after a bit of a gap, and picked up the remnants of the cancelled MTB ride - cancelled due to muddy tracks; I thought that was the point! To Buntingford and back without any of the mechanical shenanigans of the previous week. The cafe met our needs promptly and efficiently. Three local to Bunters sauntered home, the rest dealt with a light headwind on return to Ware. Sunny conditions at last throughout the 33 miles. Here's to Sunny Jim - thanks for the holiday. Cheers!