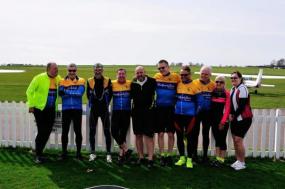 Cat 3 run led by Barry Page
After a warm up on the 1st club 10, eight riders set off on a lactate-reducing warm-down with the aid of tea and cakes - just like the pro's do! Just outside Whitwell we stopped to let a tractor out of a pub car park and about 25 his mates followed. We thought better of following in a haze of blue smoke and turned to Codicote.
Cat 5 run led by John Farnham
Six bicycles plus the Velomobile rolled out of Ware en route to Buntingford through Wareside, Much Hadham, Little Hadham, Albury, Furneux & Stocking Pelham, after which a fairly rare East wind pushed us up the hill into Brent Pelham. On leaving the village we encountered a ginger cat emerging from the hedgerow, which upon seeing the Velomobile went into 'turbo moggy mode', shot straight through the peloton, won the sprint and promptly disappeared into the hedge on the opposite side. After the feline encounter we continued on via Meesden, Anstey, Wyddial to the Coffee Shop in Buntingford which was surprisingly quiet for a bright and sunny day. Return route through Westmill up to Cherry Green where the Herts Wheelers puncture repair sub committee had to be re-formed to deal with a soggy back tyre. Thereafter via Nasty, Great Munden, Old Hall Green, Colliers End, Barwick back to Ware without further incident. 42 miles.
Cat 6 run led by Danny Hood
What with today's TT taking place, the cat 6 posse were missing a few of our regular riders. Sheriff cube however was delighted with the turn out and we set off across the prairies in pursuit of coffee and cake, warmed by the rising sun. It wasn't too long before we reached the first of the days mountain's, the posse gritted their teeth and rode on through the pass all the time keeping an eye out for an Apache ambush. This thankfully didn't appear and neither did any mechanicals, so we made good time and arrived at fort stapleford an hour before High-Noon. As we entered the saloon we were asked if we were the vintage/ veterans cycling club.? You can imagine the response she got!! ........ No were not.... But Franco could well be. Only kidding my Italian spaghetti western amigo. It being lovely and sunny we sat outside by the runway where Danny Horn proceed to identify all the taxiing aircraft to us. It's seems that those flying lessons weren't wasted and he can now read what it says on the side of aircraft better than your average Joe. DO-NUT being my personal fave.
One of the team decided he was going to make his own back to the range and the rest of us followed the tracks back to Dodge city.
A great ride, with great company as usual.
All together now.... YEE-HA!!!!;