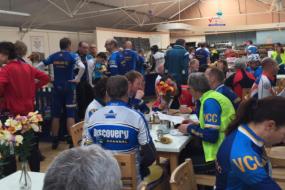 Barry led 6 off on the post hill climb ride. Brian H soon turned off for home and Peter W diverted to join John F at Hinxworth. Perhaps disoriented by only coming second in a Club event, Barry continued towards Whitwell on an unusual route which seemed destined to run to the east of Stevenage. A bit of quick thinking determined that the real destination had always been Ardeley. Thus Barry, Graham K, Paul Laws and Paul Milner enjoyed sunshine and cake at Church Farm before heading back to Ware via Great Munden and the old A10.

A group of 9 including 2 very late arrivals, who almost missed the ride, left Glaxo's for our occasional foray up into Herts/Beds border country by way of High Cross, Dane End, Great Munden, Ardeley where one of our number still suffering from an Albanian bug diverted for an early coffee stop at Church Farm. The remaining 8 battled on into the wind to Halls Green and Weston where a couple of other members had to be reminded about club run rule no. 1 (again). Once re-assembled we progressed via Bird Hill, Baldock, Bygrave, Ashwell to Farrowby Farm, Hinxworth. A busy tea room provided food and drink a little quicker than promised and we were then on our way back home this time aided by a chuff wind. Returning through Ashwell, Slip End, Sandon, Buntingford, Great Munden, Colliers End, Barwick ford back to Ware. 60 miles. No punctures or mechanicals.

Timing is everything, but sometimes owes more to luck than judgement. The cat 6 group of 8, left Hertford to pick up any hill climbers/ hill climb officials who might be interested in a poodle to Emily's. 8 grew to 10. It became clear the whole world was descending on Emily's - well, another post hill climb group plus North Roaders. The destination was therefore changed to Vanstones Garden Centre north of Codicote. It was almost empty on arrival and the group was soon served and bantering. Then Verulam cyclists arrived and kept coming throughout our stopover. Do all their groups go to one cafe - it seems that way ( Yes, I think they do. GK !)? Some will have got elevenses, most lunch and some afternoon tea. Good job our fortuitous timing was spot on. The return leg was uneventful in increasing sunshine. Back at 12.50, 29 miles.