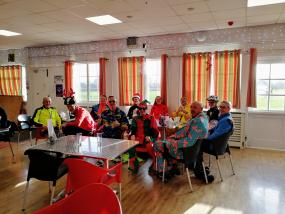 Ten Wheelers turned up at Allenbury’s Ware to be blown swiftly to Dores Kitchen, High Roding. The route was designed to take advantage of the forecasted 18 mph west south west breeze (I would have called it a wind), via Roydon, Nazeing, a bit of Harlow and on through the Lavers (Magdalen, High and Little) heading for High Roding and Dores Kitchen. We were greeted by more parked bikes than you can buy from Wiggle! Apparently Dores Kitchen is by appointment only on a Sunday!

A management decision had us clipped back into the bikes heading for Sawbridgeworth via Hatfield Health, Great Canfield and Hatfield Broad Oak. As we passed a The Village Tea Room in Hatfield Heath I couldn’t see a parked bike in site! Bikes locked, in we went where they accommodated all ten of us, which was great because upon leaving High Roding we had turned straight into the wind, so the 8 further windy miles before coffee were challenging!

In no time we were on our way home though Sheering, Sawbridgeworth, Green Tye, Widford and back to Ware. 53 Miles at an average speed on 15 mph!

The East side massive, or as they are more usually known,  the cat six ride, gathered at Ware for the fancy dress /Xmas ride. We set off with eleven but were soon joined by one more making up a nice round dozen. Among the crew were Buddy the Elf, Mr. Fish, Hawaii Five O, a Santa, reindeer, tinsel and some gangsta from Staines. Aiiiii,me Julie.
Lynn's café were spot on, providing quick food and drinks at very reasonable prices. The staff were very friendly and seemed pleased to receive us, even taking a photo of the gang for their Facebook page. All the talk on the way there of the wind being at our backs on the return was the kiss of death. We began our return run into a force nine gale that increased in strength all the way back. At some points I was actually blown to a stand still while going downhill! We eventually reached Epping, where the rag tag bunch split. Those who could sprinted off while those who couldn't crept home. I know I fell into the latter group, the hilliest ride and hurricane force wind mean I'm sitting here writing this report totally cream crackered. I asked me Julie to give me a good rub down. I can't repeat what she told me. If she doesn't buck up she's getting sacked....
Thanks to those that made the effort today it was great fun as usual.
Respect Rassclaats.... West side.

Although this autumn has generally proved to be quite wet, we have usually been blessed with dry Sundays. This theme continued for our ride today, but it was certainly windy with a few very strong gusts to catch out the unwary. A strong south westerly gave the seven Wheelers considerable assistance out through Barwick Ford, Puckeridge, the Pelhams, Berden, Wicken and Arkesden, before grovelling up the hill into the wind to Clavering. Poppy's Barn Tea Room has that welcome combination of being both cyclist friendly and serving up good tea and tucker. The return leg through Langley, the Pelhams and the Hadhams proved to be a trial by wind and the extra effort required did reduce the amount of conversation considerably. 45 miles in total, 5 more than advertised but at no extra charge. No punctures, mechanicals or tumbles to blight our day.