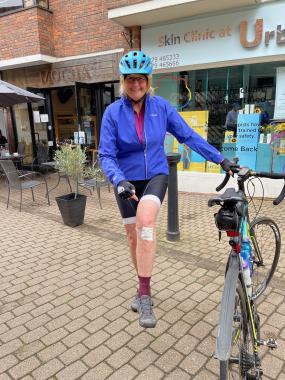 The perils of not unclipping!

When I turned up at Ware at 9, it was absolutely lashing it down with rain on the way up. I was thinking maybe two or three might turn up today. As I was waiting, Steve Gershon turned up and then Cathy, who was hoping and preying (or is it praying) that that no one else would come so she didn’t have to ride the Cat 5s. Sadly, Ian turned up and Cathy knew it was time to ride off, lol.
While I was waiting more and more riders turned up. A big welcome to Richard Hann who advised me (over email) that he might not keep up. Richard, I am sorry for calling you Kevin! Please accept my humble apologies Sir! Just before the 9.30 bell rang, I counted eleven riders all raring to go. It was lovely to see Stu Whitenstall, who got a day pass and showed me said pass with the correct signatures on it!
As we set off, just at the Allenbury gates, I shouted “Car!” and everyone stopped. However, poor Carolyn couldn’t clip out in time and came crashing down on my bike. Luckily I heard her scream and jumped off in time as she came crashing down. She had gashed her knee and it looked really sore. However, in good ol’ fashioned Wheelers form, she got a plaster from RR (Rapha Rogers) and stuck the band aid on. Off we went.
We rode through the lanes, ride ride ride blah blah blah and not a great deal happened, as usual great banter and I found out Kevin (Richard really) could ride and was at the front all the time. We rode at a blistering pace and I was impressed, actually so impressed I had to keep riding backwards to keep counting everyone (that’s my excuse lol).
We got to Mocha at 11 and I then realised Martin loved his food, I mean having 8 bacon rolls in one session is just being greedy! Ok so it might not have been 8, but you need to make the ride reports sound good don’t you.
We left the café around 11:30ish and as I noticed RR, Steve and Gary were missing. If you know Bishops Stortford, it’s a pain to navigate 11 riders. We waited about 2 minutes and luckily they came round the corner. Phew!
I decided to take us up the hill! We rode on and then the inevitable happened, yes, Gary had a puncture with the his tubeless tyres. However, after a few pumps, hey presto, it sealed.
We rode a couple more miles and then another disaster on Cold Christmas Lane. Poor Jem had a puncture, which changed this swiftly and efficiently. I was so impressed, even more impressed that Kate held his bike for him :-).
Despite the weather forecast saying it was going to lash it down, we only had a little bit of drizzle, nothing major.

Jem and I got back to Allenburys and then about five minutes later, Gary came riding in. I’m so so so so so so sorry Gary, I could have sworn you were in front of me.
All in all, a nice ride out and nice banter. Thanks all for coming, and having 11 riders on a day that was supposed to be torrential rain, is brilliant.
Lisa Ridoutt moaned that she got soaked on the 3s and we all noticed on Strava that she’s a local legend. I can’t say what types local legend she is, just look on Strava will you all (roflmao). I would just like all to “friend” Lisa Ridoutt on Strava so you can see what type or legend she is :-).
Thanks all for coming!

As Graham arrived at Hartham the heavy rain had ceased, to be replaced by a persistent drizzle. Gary, Andrew and Elio were huddled in the bushes investigating Gary's bike, which had developed an irritating rattle every time it encountered a poor road surface - so pretty much all the time. Andrew was wet and tired having fought a strong headwind all the way from Buntingford. Elio had emerged from his car and was wondering whether to get straight back in it. Gary's rattle was diagnosed but the cure would have to wait until he was back home and in his garage. The rain increased, the tension rose, would we set off or would we sneak off home and pretend we had never meant to ride in the first place? We moved to the shelter of the Sainsbury's trolley park. Alex arrived followed by points-competition pace-setter Lisa. The hour arrived, we looked at each other, finally settled on riding and headed off into the gloom.

One mile later we stopped as Graham had a flat. By the time that was fixed a slice of what advantage might have been gained by the 9:00 start had been lost. The rain eased a bit. Our route out towards Lilley went via the Ayots and Peter's Green. It might have been easier to appreciate the novelty of this route and the pretty lanes we encountered had the sun made even a brief appearance. We could also have done without an irate motorist who objected to our presence on "his" lane - oh, and it was a bit hilly. Once back on the more familiar territory of Lilley Bottom we made steady, if damp, progress through Lilley, Streatley and Harlington to Poplars.

Refuelled variously with generous portions of cake and home-made delicacies we emerged to a steady drizzle and set off towards Hexton. On the descent out of Harlington, Elio had a nasty crash ending in a ditch. He emerged battered, bruised and grazed but insisted he was alright really as the ditch had been soft. A tough guy our Elio!

Now the rain really got into its stride and by the time we reached the climb up from Hexton it was a torrent with visibility severely impaired. Fortunately it eased off a little in Lilly and was reduced to a drizzle by Whitwell. Then it was back via Codicote and the B1000 with Elio demonstrating his power of recovery by leading from the front for the last stretch to Hertford.

It was a tough day; cold, wet and hilly - so well done all for completing it.