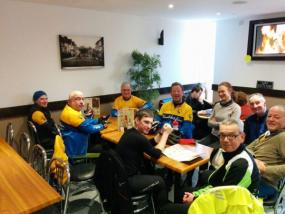 Seven of us set off towards the Chilterns via Dunstable Downs & the Pedley Hill. The cold north wind was really blowing and was very energy sapping but my hardy crew of riders battled through to a well earned cup of tea and snacks on The Downs. After the break we tackled Pedley Hill, which was new to some of the crew, but they conquered it and overall had a good, tough day in the saddle. We rode just over 60 miles and look forward to our next excursion. No mechanical breakdowns (only mental).

A tale of Les Deux Pierres.  PeterB and myself met at Hartham for a potentially cold ride to Shenley.  Sadly there were no other takers.  PB assured me that the promised rain wouldn't arrive until 2pm and as I wanted to be back before then anyway all was good.  It turned out to be a fine day.  Bit cold, but sunny and not too windy.  Got to Shenley where the manager sympathised with my lack of magnetism but I did point out that there were two of us this time - double my previous effort.  Wind picked up a bit for the return but we got back at 1:30pm, 45 miles & no problems.  NB the rain appeared as promised at 2pm.  PW.

The prospects did not look good on Saturday with a forecast of rain and hail on Sunday morning, for the combination of this ride leader plus the Bishops' Stortford destination has previously resulted in the aforementioned precipitation. A perfect storm indeed. In fact the deluge stayed away until late afternoon, although the cold and wind were a challenge. Numbers were down - maybe it was the expected weather, or the North London southern softie handbags confrontation at lunchtime. Ten out and back, 31 miles, in Ware by 1 pm.