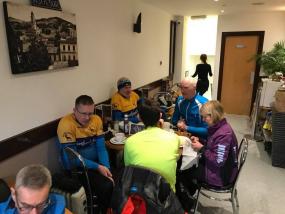 13 - 3 – Sounds like a rugby score, doesn’t it! All will be revealed. So, 13 members turned up for my first ride as leader. It certainly was a game of two halves.
First half
So I planned a nice little 35 mile ride up to Café Mocha, so we set off at a nice steady pace and all was going well. Everyone appeared nice and happy with the pace and the day was brightening up, even if it was somewhat cold with 3 Celsius being recorded on the mercury, well the Garmin, but I digress. I decided to a do a figure of eight ride, riding up through Cold Christmas, through the Hadhams, down through Green Tye, Allens Green, into Sawbridgeworth, then straight up to Bishops Stortford. All was going well until about two miles from the café, disaster struck, I had a rear puncture, so I duly set out to change the inner tube and Peter Walton strolled up to me and whispered the “The Ride Leader can’t get a puncture” – This made me laugh. So puncture repaired, we set off again and got to the café. Well the service was well below par for the café, and poor old Mike had to wait ages for his food. After about forty minutes, we came downstairs and went to the bikes. Gary and Janine said their goodbyes as they had to rush off and get home, we all said our goodbyes. Down to 11!
Second Half
We all took the locks off the bikes and that’s when I noticed I had a rear wheel puncture AGAIN! The group was not impressed and there were a few scowls (I made that up!). This time Peter and Kevin jumped to my aid and gave me a hand as they could see I was starting to become flustered and somewhat embarrassed - thanks guys. So we set off oooop north and were riding up Rye Street at the junction of Hazel End Road, I took the group right, got the roundabout at the A120, then I noticed a problem with Will, he had come off his bike and injured himself, luckily not too badly. Then I noticed that Mike, Danny, Franco and MaryRose had vanished. Then I noticed Bruno had gone off into the distance. By then I was absolutely gutted that I had “lost” more than half of my ride. So on went Peter, Kevin, Martin, Paul and I. We got to the Gypsy Lane turn off and went west. I then spoke with Franco who advised they were all safe and were taking a quicker ride home. Down to 5! So we carried on and Will advised he needed to shoot off and he went like a Greyhound out of the traps. Down to 4! Then Peter took his turn off to go home. Down to 3! The intrepid trio of McPheat, Buckle and Dos Santos rode on and got back just in time for dinner! Well nearer to 2. Thanks all for being so patient and next time, if allowed to lead a ride, I hope not to get two punctures. Sorry for the War and Peace.