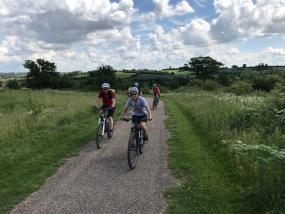 Starting from Much Hadham a group of seven Wheelers lead by Tim Dobson rode a mainly off road route along the River Stort and through the Lea Valley following Sustrans National route 1 with a detour through the former Royal Small Arms Factory in Enfield, and returned mainly along the Lea and then retraced the route back to Much Hadham. A very warm and enjoyable day by all, 40 miles in total.

Fourteen intrepid souls gathered at base camp for the assault of the 100k club audax route. As I had somehow managed to upload the route onto my Garmin, I've still got no idea how I managed it. I was slightly more optimistic of getting everyone around the course and back home. Only slightly though.  Luckily enough several other members had also put the route onto their Garmins and they knew how to use them. For the second ride running the tyres on my summer bike punctured. Rizzla tyres are it seems a bit on the thin side. New ones are on order now. The café stop at Ardeley was to say the least a f*#@...g disaster. After lining up for nearly half an hour, half the group decided not to bother ordering due to the likely wait for their food. The half that did order waited for about 45 mins for the food to arrive and thus by the time we began the second half of the journey it was past two o'clock. Two had decided to return home from the café, so the dirty dozen headed off for part two of the journey. All was going swimmingly, and even I was managing to follow the Garmin route, that was until it informed me we were off route as we had missed the turning. Instead of going back 20 yards we ignored the device and ploughed on; apparently we could rejoin the route by the next turning on the left. Hogwash! We had missed out a big chunk of the route and now what with how late it was the group was getting fractured. Two who were practically home broke off in that direction, while the rest split into two. Three decided to complete (well do more than the rest of us) and headed off into the sunset, while the remainder made a blast for home.
4 hours and 40 mins of riding and about 56.5 miles.
Great fun as ever, glorious weather and good company. Oh and the café stop from hell!
Laters alligators.