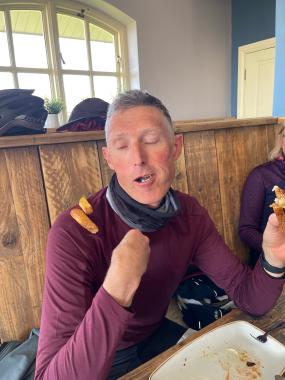 Everyone was excited as this is our favourite venue at the moment.

I knew it was going to be cold, but 1°C in the beginning of April is just ridiculous (note to self, write a stern letter to the Met office).

I would just like to give a warm welcome to Nicolette, yes, she came last week, but I wasn’t there, so hello and welcome.

I digress, I only expected three or four to turn up, it was cold, it was Much Hadham etc etc. However, to my surprise and looking down the High Street, a plethora (I know, I know, you lot didn’t realise I could write such big words!) of riders were coming down; I rubbed my eyes and, yes, they were Wheelers. Adrian turned up, lovely to see you again, and also Daniel Horn rocked up too. In all, there were ten, yes ten, Wheelers.

We were just about to set off and poor old David Smith had a nose bleed, so the start time was moved back (with the sponsors agreeing) to 9.45!

We were off and decided to take the Winding Hill (did I tell you I don’t like hills?) and it was bleedin’ freezing. However, we soon started warming up when the sun came out and it became quite pleasant. Nicolette decided to challenge me to a race, as did Suj, Daniel; in fact everyone did and off we went down to the telephone box in one of the “Tyes”. It was winner take all, until an Audi TT decided it wanted to run us over, and everyone backed off, except Daniel who got to the phone box, thinking we were racing. He looked over his shoulder and no one was behind him. Lol.

We got to the Polo Club (posh eh) at 11:30ish and as usual, once the food was ordered it came in good time.

All fed and watered, Daniel lost his glasses (they were on his head) and Peter K had a right chip or two - see the image - on his shoulder!

I can honestly say it was a lovely ride with great company as normal.