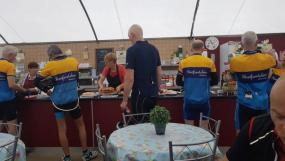 Bolstered by a couple of Cat 3 regulars who didn’t fancy Barry’s 100 miler, eight set off from Hartham bound for Mill End Garden centre at Rushden. Not quite up to Mike Easts’ immaculate timekeeping, Captain Bob got his group to the venue two minutes early at 10.58.
After excellent cakes and coffee at the very welcoming tearooms, the return ride took in a loop around Bennington just to test the legs. But this brought about a puncture which caused enough of a delay to cause the ride leader to change the plan on reaching Watton, and a thrash along the A119 finished off a good ride.
32 miles at 12.5mph