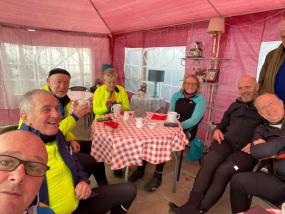 The category 6 crew enjoying their repast

The morning weather forecast advised 2°C. We all got there and it was cold, but luckily no heavy frost and no ice. Hanif turned up on his mountain bike, with 20 PSI in his tyre - he’s nuts isn’t he!  It was lovely to see Martin Buckle.

So we set off At 9.31 and went like the clappers. Usual banter with Richard “Kev” Hann; obviously it was in the gutter. We didn’t have a single mechanical along route.

About four miles before Mill End, the cat 2’s rode past us. We can now all say we’ve been on a Cat 2 ride, albeit for .0005 of a second. I then had this sinking feeling that they had changed their route and were going to get the Bakewell before us! So twenty minutes later, we turned up at Mill End and I saw the pinky machine of O’Shea and my heart did sink. We got into the cafe and there they were with all the Bakewell. I got to be served and yes, you guessed it, the Bakewell was gone. Ah well!

We all had a nice chat and banter.  All fed and watered, we rode off.

I must say the “master route master” (Carolyn) had made a somewhat hilly route and it started to pay! However, we struggled on got to Allenbury’s with no mechanicals whatsoever. Good, eh!

It was lovely to see the Cat 2’s and have great banter.

Thanks all for coming, a most enjoyable ride.

Now for the big question. Who is going to win the Kelleway Cup this month?

Obviously written from the throne. Dos Santos - Over and out.

There was a good turnout again for a cold January morning, as six cat 4 riders Lisa, Peter, Gary, Enzo, Denis and Ian, headed northwest from Hertford, hotly pursued by the legendary cat 3 team who made their move to overtake the 4s at the top of the hill near Bramfield Woods. Pedal as they might, there was little opportunity to re-take the lead, though there was still very little between the two groups heading up the hill to Old Knebworth, until there was a parting of the ways prior to Codicote as the Cat 3 team, fearing the competition, took a sharp right turn up Hitchin Road hoping not to be seen!

The dreaded Hitchin Hill, that had earlier in the week been the subject of a severe altitude warning on Slack from a Wheeler who presumably waved at us from his front door as we rode past his house, proved to be nothing more than a big slope for this group! So, we settled down to a decent pace through Kings Walden and Preston to arrive at the Four-Leaf Clover Café in Hitchin just before half past eleven.  It would have been earlier but for a series of U turns and interesting alley ways as we navigated through the maze that serves as the one-way system in the town of Hitchin.

Lunch was fun as usual; this is a very pleasant little café, but the breakfast king’s influence seemed to be having an alarming effect on the group, as Enzo and Gary ordered eggs and even Peter abandoned the obligatory slice of cake in favour of a bacon and egg sandwich! Only Lisa and Denis stuck to regular cycling fayre, though I’m not so sure that hot chocolate falls into that category Denis!

Hitchin is one of those towns that sits down in a valley, and unfortunately whichever way you try to leave that place it is uphill. The post lunch drag to Weston was not as bad as the road up from Letchworth to Weston but does go on for much longer.

Once past Weston we had some interesting ups and downs through Ardeley and Great Munden, before we all stopped at the top of the climb from Dane End to Whempstead to get the up-to-date headline news on Denis’s experimental tyres! He gave a description that was longer than the manual you get when you purchase a Garmin (not that that is very long), but more importantly Denis has concluded that they are only suitable for use inside the M25, so presumably he is going to change his wheels each time he crosses that mighty concrete artery.

A few more “inclines” (as Lisa put it) and we all arrived safely back in Hertford.

Thanks to all for a very enjoyable day!