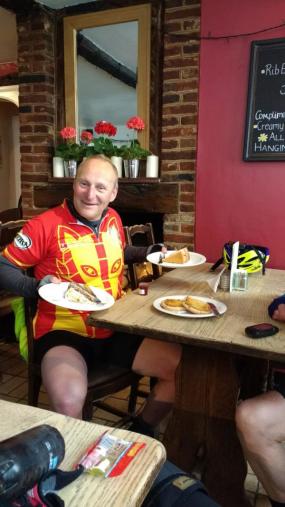 Lots of people must have been otherwise engaged on Bank Holiday duties (or they didn’t fancy the ride) as only 7 assembled for the run to Church Farm, Ardeley. Sunny, and warm enough for shorts, but still with a strong wind.
Out via Bramfield, Datchworth, Aston and Benington, leader Capt. Bob threw in a few extra hills out of the goodness of his heart, and others in the group regularly thanked him for this. Franco left early to go home and get the BBQ going, so six it was for the delights of Church Farm. Well for five it was, as one had a rather different experience, including his money back!
Into the strong wind on the way home via Wood End, Whempstead and The North West Passage (ask Mike East if you don’t know), the rapidly shrinking group completed 33 miles (10% extra free) with no mechanicals or punctures.

Twelve - including guest Tony Howard - set off from Allenburys on a bright but breezy morning. The destination was Parrishes in Thaxted, which had relaxed their cycling restrictions in favour of the Wheelers - so we were all on our best behaviour.

We headed north to Hare Street (where Paul H left us) then east, so the strong south-easterly breeze helped then hindered. Just after Stocking Pelham we were passed by a flotilla of glossy Mercedes, presumably on some club run of their own. Sadly for them, once the last car had negotiated its way past us the occupants of the lead car succumbed to calls of nature and had to disappear behind a hedge - so we were once again in front. Fortunately, or possibly consequentially, they did not follow us thereafter.

Parrishes were very welcoming and none of us disgraced ourselves, so we set off smug and refreshed. The return was south to Takeley then west back to Ware via Spellbrook. This time we started with a head-wind and finished with a tail-wind, which is as it should be.

No punctures, no mechanicals, no crashes.

A Much Hadham start saw 6 Wheelers set out east into the wind through Hadham Ford, Green Tye, Allen's Green, Sawbridgeworth, Sheering, Matching Church, Matching Green, Cobbler's Pieces, Abbess Roding, Bird's Green, Four Wantz, Good Easter, Stagden Cross to High Easter. The unusually strong easterly wind made for hard going in places, but the hedgerows and regular changes of direction gave us some respite from the worse of it. Fortunately we arrived at the The Snug Café just before a large group of seniors on a day out by vintage coach and were fed & watered efficiently. A much faster return leg through High Roding, Great Canfield, Bush End, Hatfield Forest, Spellbrook, where we were overtaken by the Cat 3 group returning from Thaxted, Green Tye back to Much Hadham. 45 miles. No punctures or mechanicals.