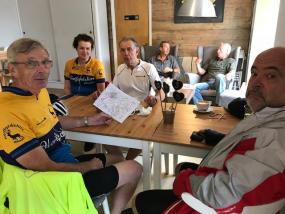 Just seven met up at Allenbury’s for a mid-summer pootle to Bishops Stortford. Just seven!  Maybe it was member involvement in so many events on the same weekend - the Tour, the London Surrey 100, the Dunwich Dynamo. Maybe it was the outrageous prices at the sophisticated Mocha Cafe, our mid-ride stop. Maybe it was the rain, which for most of the first half, was quite heavy.
The group reduced by one before le depart - a member feared the consequences en route of a vegetable high on the Scoville scale consumed the day before.
A routine ride out via Spellbrook with a puncture, then Michelin starred tasty tuck. The ride back took in Farnham and Little Hadham in drizzly rain. Then everyone off home to shower, and contemplate the end of the summer 2018 under warm blankets together with hot water bottles. 33 miles.

Much Hadham to Snug Cafe, High Easter - 38 miles
Wet ride so opted for shorter route. Fortunately the group of 20 other cyclists were just leaving when we arrived as sitting outside did not seem terribly appealing. Enjoyed very pleasant food whilst putting the world to rights in conversation and rode home in almost dry conditions.