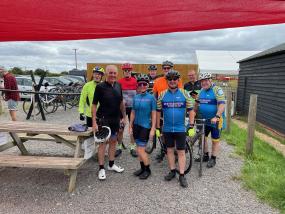 I rocked up at Allenburys at 9 in the car and not one drop of alcohol had passed my lips the night before. I know shock horror eh!

Nine riders (including me) left a tad late as we were chatting.

Not a great happened along the route to be honest with you. Apart from a howling wind, which was at least 100mph (might be exaggerating a bit). I would tell you where we rode, but that’s boring isn’t it!

We got to the cafe and surprisingly Cammas Hall has got cheaper, which was a nice surprise.

We took the obligatory cat 6 photo and if you look carefully Ian looks like he’s holding a bike in his hands at the back! Rachel Is posing for Vogue, Graham is holding his stomach in, Steve is giving the cameraman daggers and wants it all over. Pete E only wants to be 3/4 in the picture and there’s me and Bruno trying to hold our bellies in without success! Gary is smiling because he knows the cameraman is reflecting in his glasses and Steve Gershon didn’t have a clue what’s going on!

As we left the cafe with a tailwind,  it then turned on us and became a headwind. We all grumbled and got on with it.

We got back to Allenburys at 1.20 pm with a great average speed of 13.2mph. No mechanicals and no punctures. All in all a great ride. Thanks all for coming. This has obviously been written on the throne. Over and out!

With the main cat 3 club run heading out to the coast for the day, I took up Graham’s suggestion and was happy to lead a shorter, alternative cat 3 ride. Having lead cat 6 to the same coffee stop (Mill End Plants) the previous week, the temptation was to just go round the same route twice in order to gain the extra mileage and altitude.

Realising I may not get away with that, we instead headed off in a different direction to the previous week. Six of us left Hertford. It was great to have three riders joining from cat 6 for their first ride out with the 3’s.

The sun did its usual disappearing act within 20 minutes of the start and we had quite a strong head wind to contend with on the way out.

After an enjoyable cafe stop, we all held our breath as we watched Will retrieve his bike from the rack whilst trying not to knock over a Stevenage cycling club member’s £8000 (estimated) bike propped up next to his.

Just outside Hertford two of our gang headed for home whilst the rest of us did the final loop round. This included a climb up Robins Nest Hill, at which point I was seriously cursing the lead rider for putting this long hill climb in at the end of a ride!

Note to self, ’take the opportunity to miss out a few steep hills when you’re in charge of planning the route’.