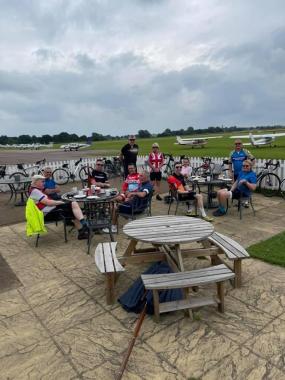 The weather forecast advised rain all day but the night before it advised from 11.
At about 9.15 there must have been at least 300 (OK, I may be exaggerating a little!) Wheelers waiting to ride off!  Eleven crazies had turned up with sou’westers and coats (all yellow obviously) wanting to ride with the cat 6, despite me posting the route the night before there were hills! It was nice to see Mike East come along after 16 months of not riding with the 6’s.
We set off at 9:30ish as we were waiting for the lazy ones (Cat 3) to leave. They would not budge. So with a commanding voice I shouted “let’s go”!
We shot off out the traps (as we always do) and headed east for Widbury Hill (I think that’s what it’s called lol). All everyone could hear was the ride leader and Ian Bailey moaning as we rode up the hill.
Nothing really eventful happened on the route to the airfield apart from hills. Still no rain!
At the aerodrome, Janine, as normal started to make plane noises. Ian, as normal, ordered the full English.
Forty five minutes later, we were fed and watered and photos taken.
When we left, David realised he still had his jacket on. We got it rolled up and in his back pocket and off we went again. Still no rain!
Up, up and up we went (sounds like a movie doesn’t it) and after the hills we were about 8-9 miles from home when Rebecca said to me she “f***** hates hills”. I was howling with laughter, so she then proceeded to beg me not to put it in the ride report. She should know better.
At Stanstead Abbots we decided to turn right (although Lee wanted to ride another hill) so up we went. Hanif wasn’t there and he would have been gutted about us turning right for once. Afterwards, we had a nice ride down the hill into Ware.
All in all a nice ride and great company. Not a single mechanical or puncture. And amazingly despite the Met office saying it was going to rain, it didn’t. Sorry the ride report was a little short, I didn’t spend that long on the toilet this time!
Thanks all for coming.