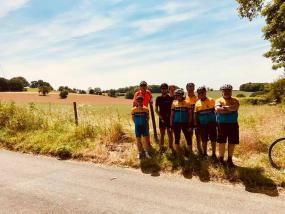 Feeling energized from Summer Solstice, 12 cycling druids set out on a cake pilgrimage to Mill End Plants. Under the rising, and already hot sun, we sat back on our saddles and took in the beautiful scenery en route. Like clouds, carried in a gentle breeze, we floated leisurely through Bramfield, Datchworth, Aston End , Walkern, and Cromer before arriving at Rushden for 10:45. Early some may say, but the early bird catches the Bakewell, and believe me, the Bakewell tarts at Mill End are worth catching.  We opted for the al fresco tables in the secluded rear garden, which offered some cool shade as we carbo loaded for our slightly longer return. Departing at 11:45, and conscious of the fast approaching 1pm England v Panama game, we knew were up against the clock. Three fans cracked, and opted to take a short direct route back, the rest of us deciding that an 18mph average was easily achievable. Brim full of patriotic optimism, we gunned it back as far as Dane End, probably averaging around 27mph. As we were now doing so well for time, we decided to relax and take a few group photos in front of a picturesque poppy field. Back on our bikes, the time to kick-off was now ticking closer at an alarming pace; predictions for the first half started creeping in to our conversation, inaccurate ones at that! Watton-at-Stone High Street was a blur as our 9-up time trial formation clawed back the valuable seconds. No mechanicals were allowed, and things went smoothly. We arrived back in Hertford at 1:05pm, some early goals missed, but no enjoyable time lost.