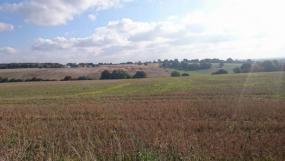 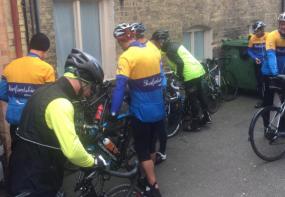 16 set off from Ware. The weather was glorious and even the breeze in our faces could be relished for the help it would give on the return from Saffron Walden. The outward route headed north to Barley then climbed to Chishill before negotiating the high ground near Elmdon, Strethall and Ickleton. Return was via Newport, Clavering, Berden and the Hadhams.
The section before Barkway was enlivened by an attack on a short hill that scattered the peloton all over the road and left the team leader isolated in a second group. There was no coordinated attempt to organise a chase though individuals did sprint across the gap. Fortunately there was a re-grouping after Barley where the break-away group missed the turn towards Chishill, headed towards Fowlmere and had to return (Ho ho!). However, this was not before three riders who had lost touch wrongly guessed the route and set of to the east after Barkway.
I think we can do better than this and we did so on the way back with a nice, steady pace set by the stronger riders and a greater willingness to ease off the pace to keep everyone together.
55 miles.

After a minor delay caused by a clerical error (one wheeler raced form Ware to the correct start location) 11 eager wheelers left Hartham like Greyhounds from a trap. The miles flew by as we took in the beautiful colours of Autumn scenery via Bramfield, Datchworth and Walkern. At Cromer Windmill, a slow puncture required just enough air to make the few minute ride to Church Farm where the tube was then expertly replaced in record time. Sunshine galore as we headed back via Gt Mundon, Dane End, Whempstead and Watton on what seemed to be mostly flat or downhill roads. A cunning alpine climb, within a stone's throw of the finish line, was welcomed by all. Apple trees lined part of our decent into Hertford, as we rode through the fallen apples our tyres picked up the cider, making our peloton smell like a brewery! A refreshing end to a leisurely ride.