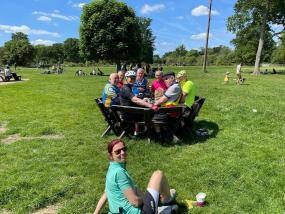 Before we set off, I was busy helping Claire with her posh Garmin. It was slow and laggy and then she said she had never updated it! User error then!

Chris advised he was somewhat hanging as the night before he’d downed about 8 bottles of wine. Claire did interject and advised they also had a bottle of beer as well! This is what I like, honed athletes turning up at the start!

No Rebecca either as she was away, obviously having a drink. No Davina either as she’s the latest “Vid Kid”. Well at least we knew we could get off on time!

We all sound like we like a drink or two, don’t we! Well actually we do and it’s a drink or three, or four or five…..

At 9.35 we set off. I don’t think anything really happened on the way to Hatfield Forest, apart from Chris; he was telling us all about him jumping off the tables the night before after the fourth bottle of wine!

Carolyn, as usual was storming and Kev, was well, Kev! I do have to mention Pinky Rogers with the brightest top I’ve ever seen. Amazing Graham, and a really nice top.

We got to Hatfield Forest Cafe at 11.15, perfect timing, as ten minutes later the queue for the café was nearly outside the car park.

We sat in the sun and whiled away with great banter as usual and Chris having to dive for shade as he was seriously hanging by now and informed us he may have to throw up soon. Marvellous, I thought, he’s taking the mantle from me!

We rode off at 12 on the nose, and once again no mechanicals at all. The bike gods had blessed us all.

It was nice to see Amanda out again and she’s advised she would like to become a member - she has to be absolutely nuts.

This was a day of not a single mechanical, not even a slipped chain, well Daniel wasn’t here this week, was he? He was away on some jaunt!

I’m so impressed that the 6’s havegelled so well, and we all have great banter.

Love and kisses to all and, obviously, written from the throne. This is not to be mistaken with Chris throwing up on the throne!

A warm morning was in prospect as eight riders started the category 4 ride dead on time, heading for one of the Wheelers’ favourite stops, the garden centre at Mill End. A north westerly start in the Luton direction was hopefully a bit different to the normal routes to Mill End, sweeping round through some very pleasant countryside to Baldock before the ascent through Wallington, that little village on the top of a hill, before dropping down towards Rushden.

All was going well until Redcoats Green, when Lesley and Steve decided they needed a bit of time to themselves and took the direct route to Stevenage. As this great town has not been granted city status in the forthcoming Queen’s Jubilee celebrations, it was not considered worthy of a visit on this expedition, so Alex was dispatched to find the Godfreys and save them from the joys of Roaring Meg, re-uniting them with the party at Little Wymondley.

Things got back to normal until we hit the centre of Baldock, where a combination of GPS and Garmin led us straight up a cul-de-sac that even Peter’s last minute corrections had failed to detect! Panic ensued with Lisa and Elio heading in the opposite direction to everyone else, before calm returned and we made our way safely out of the town and headed east.

What a hot spot for cyclists that Mill End café is. We got to say hello to riders from the Stevenage and Hitchin clubs, who had all managed to get there before us, so we had to wait! Lisa was hoping this would set a new record for slow service so she could pass on the shame of Poppy’s Barn, but alas, nowhere is as slow as Poppy’s, so that record still stands!

The 20 mile return to Hertford was undertaken at a good pace, with Denis, Peter and Alex really going for it down the A119 from Watton at Stone. Alex could have left us at Watton, but he wanted one last view of the cemetery in Hertford (where he finally turned around to head back to Stevenage) prior to his life threatening (correction – changing!) 950 mile round trip to Edinburgh to be completed in less than 5 days!

On a serious note – good luck Alex, and thanks to all cat 4 riders for an enjoyable day.