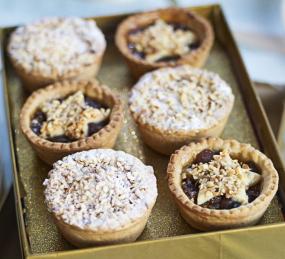 With the wet roads in mind and the need to get back to Allenbury’s for the mince pies, Captain Bob booked a visit to Something Lovely, but failed to find a 30 mile route to suit the occasion. After reporting that 8 riders would be visiting the cafe, 5 more riders appeared at leaving time. Numbers updated with the cafe, the group set off up the old A10. With many of the group under orders to get home tout de suite for a variety of reasons, the 13 had shrunk to about 7 by the time we were back at Allenbury’s. Wet, wet roads everywhere but only one puncture victim.

A record number of 10 Wheelers turned out at Hertford for our annual pre-Christmas off road ride along some of the old railway lines of Hertfordshire, now trading as the Cole Green Way and the Alban Way. The former, although with some new surfacing and drainage was still very wet in parts due to recent heavy rains and made it a bit tricky for those on touring and hybrid bikes. We were greeted at Verulamium park by our Club President, who had ridden out from home and rode part of the way back with us as well. Due to the large amount of liquid mud on the Cole Green Way, we held a muddy bottoms competition on the way back, but who actually had the 'muddiest chuff ' was open to debate. 33 miles, no punctures or mechanicals but one unfortunate tumble on the wooden bridge at Hartham, necessitating a few minutes rest and recovery.

The ride covered 54.8 miles, averaging 17.7 mph and climbing 2349 feet. The team team comprised 8 plus one guest.
The route went out to the Ashwell area, back over to Therfield Heath, Barkway, Puckeridge and then on to Ware.
The team really worked well together, suffering only one puncture on some really wet flooded roads; overall, good challenging ride.