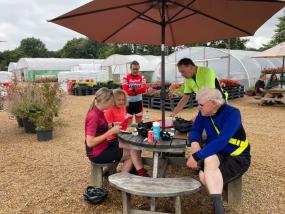 A great alternative route to Writtle with some very picturesque roads.

We were lucky with the weather again considering the forecast, as it was only damp towards the very end of the ride.

The category 6 gang met in Hertford and one member of the crew was sporting the obligatory hangover. Rather unnervingly it wasn’t TDS, he was spotted looking bright eyed and raring to go, modelling a new ‘Frosties the Tiger’ cycling top. I really tried my best to refrain from any unnecessary ‘cereal killer’ jokes or ‘bit of a frosty reception there, Tony’ and just told him he looked ‘GR-R-REAT!'

After a 10 minute delay whilst the aforementioned hungover athlete sorted out her rattling (?) cycling shoes, we set off.

Just before Bramfield, I glanced round to check on Tony the Tiger and co. To my horror we had gone from a lovely sized group of 10 riders, to a scarily large group of around 30. We had some how managed to merge with the North Road Cycling Club. Several Herts Wheelers were about to disappear round the corner with the wrong club until I waved them in the right direction.

We made a brief stop at Tewin’s newsagents in order for the 'Ibiza Classics' party animal to stock up on bottles of water in order to rehydrate.

Considering the heavy storm the night before, the roads were relatively clear from floods and debris and we made good time to Mill End Plants.

The North Road Cycling Club were just vacating their tables as we arrived (we’d obviously taken the longer route there!!!) and unfortunately they’d eaten all the Bakewell tart.

Good ride back, no mechanicals, 35 miles of cycling and 1800ft of climbing and not a single ‘LOL' in the report!!