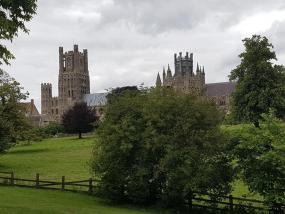 Six headed out from Hertford to sample the Chiltern Ridge around Ivinghoe. 5 were Wheelers and one more-or-less was - former member Graeme H planning to re-join. There was a secondary objective: to sample the Musette café - a cycling-themed café in Aldbury. The route out was standard fare via Datchworth, Codicote and Kimpton before heading through Markyate and Studham, where we met the Cat 2 group coming up Pedley Hill as we went down it. We then climbed up to Ringshall then down Tom's Hill to Aldbury. The Musette was fine - but a bit too up-market for our tastes.

The return climbed over the Ridgeway towards Ivinghoe then up past the beacon. Thereafter the route was fairly fast through Briden's Camp (a nasty, steep climb), Redbourne and Wheathampstead. Long, gentle climbs and short descents on the way out, the reverse on the return. The latter always seems quicker to me.

With no other rides from Ware today it was no surprise that 14 riders assembled for the “around the Lanes” ride to nearby Whitehill Golf Club. Leader Captain Bob promised to find a few hills, and he did! An early puncture was the only mishap on an enjoyable ride that took in hills at Mentley Lane, Whitehill and the Cat 1 Sacombe Hill. And good food was enjoyed at the golf club.

Not sure whether this was the ninth or tenth running of our annual trundle across the Fens from Stow cum Quy to Ely but it certainly drew the largest turnout we have had, namely 11 Wheelers and 3 guests. The almost pan flat route uses an assortment of cycle paths, the Lodes Way created by the National Trust between their properties at Anglesey Abbey and Wicken Fen, quite roads, bridleways, river banks and a motley collection of tracks which may have been roads last surfaced in the 1930's. Since our last visit the Ely southern bypass has opened and a new cycle route into the City has been created. It was all very well up to a point but parts of it seem to have been designed by someone who has never ridden a bike - nothing new there then! Due to the large peloton we split into two groups and frequented eating establishments in the City centre and by the river front. Return via a variation of our outward route which just happened to involve a tea and cake stop at Wicken Fen. 36 miles, no tumbles or mechanicals and only one puncture to fix.