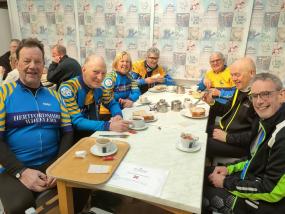 In the absence of the regular pretty young things from category 6 who were busy displaying their cycling proficiency on a local sportive, seven “experienced” sixers met at Hertford for a relaxed ride to Vanstones Garden Centre, Codicote. The weather was parky, but more pleasant when the sun shone. Ordering was slowish at the cafe, but delivery very prompt. No incidents, punctures or arguments. 27 miles in good company. And no one sat on a throne - seems to be a compulsory reference in a category 6 report (no idea what it is about).

Hot Numbers Roastery, near Royston, was the cat 4 target this Sunday, as 9 riders set off from Ware under the March Hertfordshire sunshine.

The warm(ish) weather enticed some of the gang to bring out the heavy artillery and give their summer bikes an early run.  The waft of carbon was just about everywhere, as Giants, Livs, Tifosis and Boardmans littered the early morning streets.

A 25-mile outward journey was pretty straightforward and incident free, although lovable rogue Ian Bembridge did try to deviate from the route at one point, going on auto-pilot and ignoring his GPS unit, but was soon brought to order by the rest of the group and everyone was soon back on track.

The cafe, which nobody had been to before, had the Lisa Ridoutt ‘seal of approval’ when she mentioned that ‘it’s actually supposed to be quite nice’.  And she wasn’t far wrong, as we pulled into the Shepreth eatery and found that it absolutely was ‘quite nice’.

The menu was outstanding, as was the coffee (the word Roastery in the name kind of gave it away), and cake selection.  Many calories later, the 9 dragged themselves away from the outdoor seating to start the longish homeward trek.

The ride leader, still high on his poached eggs on sourdough and a 10oz cappuccino, completely missed the first turning after leaving the cafe but no harm was done as a quick 360 degree turn around got everyone back facing the right way.  I don't think anyone noticed, but it was hard to tell as everyone in the group is just so nice...

The hard slog back to Ware had now commenced and the 3000ft of climbing really began to test these category 4 heroes.

However, the riders took it all in their stride, and but for a couple of dropped chains by resident mountain elevation expert Kate D’Arcy, and a heart stopping moment when Ian Bembridge thought his Garmin had stopped working and lost all his data, the journey back home was smooth and straightforward.  A 60 mile ride completed with nothing but smiles and sweat was the well earned reward for these intrepid roadies.

A final word must go to Gary Smith who deserves our newly created award for ‘Hertfordshire’s most pale legs’.