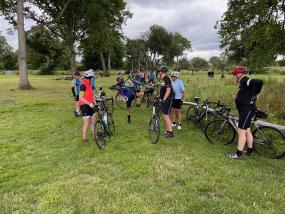 The forecast advised it was going to be a wet one. So everyone turned up short sleeved and raring to go. Well one of us rode up and didn’t drive because they were literally hanging in the gutter; I’m not going to mention their name, but he (so it’s not a lady rider) rode up from Enfield and he looked well rough! I turned up at 9am (got to Allenburys early just in case) and the Cat 3’s were all raring to go, had a chat with them and then they left.

Jem (Jeremy) Biggins turned up; this was one of his first rides and he was raring to go. Then Kevin Hart and Steve Lucas turned up also on their first ride. Nice to meet you guys. We all had a nice chat. It’s a bit daunting meeting new people isn’t it! As we’re waiting, more and more riders turned up and then even more. In total there were 16 plus Peter Walton. Peter made an impromptu Cat 4 and Peter Eldon and Kate D’Arcy joined him.

Down to 14 riders until Mark Sims turned up - I had to pinch myself. Then Rebecca turned up with her new bike - nothing like a new bike day.

We set off (as usual like dogs out of the traps) from Allenburys and I really didn’t want to lose anyone. Up through Cold Christmas Lane blah, blah, blah,ride, ride, ride. We met Daniel Horn at the Hadhams. Not a single mechanical and a lovely ride to Hatfield Forest cafe, although the road was a tad bumpy.

We got to the cafe and Rebecca showed me her new Garmin 830 (well jeal) and I changed a few settings for her. Ian ordered the full English (as normal), but then found out they didn’t do that sort of food, so he settled for 4 rolls (OK, so that’s a lie). Then Suj turned up. Apparently he turned up at 9:38am at Allenburys after we had gone. He thought he could catch us easily, but being the 6’s and averaging like 45mph (OK, so I might be exaggerating a bit), he had no chance of catching these fine athletes.

We all had a nice chat and it was good to see Matt and Grace back out on the rides, after their cycling Holly bobs in Brighton. Rapha Rogers was in fine form. We were about to start off when Lee (Crazy) Cutler realised he had a puncture. However, he had put a new inner tube back in within minutes. I took a picture of all of us and some mad person decided to do the “new bike dance” (image attached)

Off we went, passed Thremhall Park yada, yada, ride, ride. On the way back only one slipped chain. We got back to Allenburys nice and early and a 40 mile ride was done, despite me saying it was going to be 35…

The saga continued, Gary and I rode home, I took him on a new route to Hoddesdon which he enjoyed (I think), then after I left him, the heavens opened and I got soaked. I got in and showered and fell asleep. Still hanging and tired I fell into a deep and haunting sleep…….. Only a short one this week as firstly, I’m not on the toilet and secondly, I’m still hanging! Thanks all for coming, I really enjoyed it, meeting new people and in spite of me hanging.