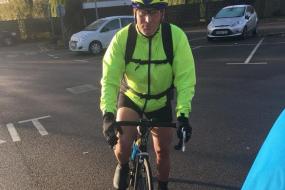 Another ride with its fair share of mishaps. 10 Wheelers made the most of the sunny but cold weather and turned up for today's ride. The first problem happened just outside Matching Tye when the wet, flinty roads accounted for Martin Buckle's puncture. Getting the tyre off proved impossible and inflating with gas canisters was not working either. The good old fashioned pump and elbow grease did manage to reinflate the tyre but this, alas, was just a temporary fix and about 3 miles later it needed doing again. We decided to try and make it to the cafe, but once again a fix was needed and this time it had to be done properly. Luckily the man for the job, our Italian stallion, Franco had stopped to help with the repairs. The rest of us had arrived at the cafe by now and gave them a call to find out what was happening. As usual Franco and his mobile workshop had managed to fix the problem, and they arrived at the cafe needing some warmth and refreshments. Martin had unfortunately aggravated his knee injury and was now finding it very hard to cycle. Peter, who was also in the wars from a crash the day before, forgot that he'd done a runner from the cafe and, being the honest chap he is, rode back to pay. We made our way slowly back home until disaster struck again, this time the hill down into Much Hadham causing Paul to lose his wheel at the bottom and crash, luckily not causing him too much pain. We all made our way back at various speeds to HQ with the majority peeling off for home en route.
Stop start due to the problems and dirty roads, but enjoyable none the less.
I must have walked under a ladder or run over a black cat recently, but heyho. Worse things happen at sea.