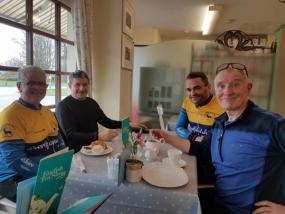 When you know that it's very windy, it’s a good idea to do a ride where you get the headwind out of the way on the out journey, but when the ride’s already been advertised and the café booked, you just have to bite the bullet and do the ride.
We did what it says on the tin! Around 30 miles (33.5 actually) at 11.5 mph (says on the tin 11-12 mph) by setting off via Star Street, Holly Cross Road to Stanstead Abbots, and then Widford, Bourne Lane, Perry Green, Allens Green and the back streets of Sawbridgeworth to access Sheering Mill Lane and Back Lane to get to The Village Tearoom via Sheering. Nine of us partook of refreshments, one set off back home on his own unfed. Numbers were reduced by several pot hunting Spurs fans defecting in favour of a home game with Southampton.
We returned to Ware via Little Hallingbury, Spellbrook, Perry Green, Much Hadham (where we all went “ah” when we saw the tiny new lambs) Kettle Green Lane and Wareside. The stretch of road into the headwind approaching Fanhams Hall was particularly cruel!

A dry but very windy day saw four Wheelers take the longer route to Buntingford via Wareside, Barwick Ford, Colliers End, Great Munden, Ardeley, Cumberlow Green, Rushden, Sandon to Buntingford. A nearly empty Coffee Shop quickly produced food and drinks and we were joined by Paul Fennell who was out on a solo ride. Return through Wyddial, Cave Gate, Anstey, Meesden, B, S & F Pelham, Little Hadham, Much Hadham, Wareside back to Ware. 52 miles, one puncture stop on the return leg. All glad to get home and out of the wind!

l arrived at the start to find the Wheelers grouped at the far side of the car park just in case the mobile crane fell on top of them, but it didn't, so eight of us set off into Essex in search of bacon sarnies. Our route out went via Roydon, Epping, Chipping Ongar, Stondon Massey to Norton Heath Café which was very busy with Essex cyclists blown there by the SW wind! We returned via Moreton, Fyfield, Sheering and Much Hadham. 60 miles.