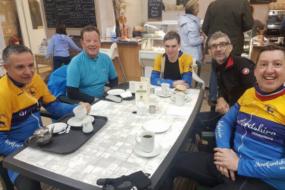 One of the downsides of leading a ride is that you have to turn up, irrespective of the weather conditions.  Of course you can then say that the ride is cancelled, but if you are already soaked then you might as well keep going.  Still, there's no such thing as bad weather - just bad choice of clothing.  So the magnificent six met at Hartham soon to be five as I turned to do the cat 5 as published.  Out through Hoddesdon to Welham Green where after a short downpour I was confronted by a tractor, followed by another, then another.......in fact the 'caterpillar' was about a mile long with about sixty tractors of different shapes and ages.  As I turned south alongside the A1 the sun came out and it was a different day.  Got to Shenley for the coffee\chips obligatoire and the opportunity to shed some sodden clothes.  The route back via Brookie Park, Lt Berkhamstead & Bayford was warm and uneventful.  Ended up doing 45 miles at an avg of 12.8mph.

After looking at the torrid weather report and seeing several ducks swim past my window (troubling as I was on the 2nd floor), I decided  a drive to the start would be more appropriate. However, due to a late communication from a fellow rider, a rendezvous was arranged for a meeting place on route, only for the leader to find that the said Wheeler had decided to "whimp" out due to the "inclement weather".
This Wheeler is made of sterner stuff, and soldiered on through the downpour to the planned start in Hertford. With the heavens unrelenting and opening up even more, 5 hardy Wheeler's headed off to the new revised route of the Wyevale garden centre in Codicote. Spirits were lifted on the return with the appearance of the sun, with all making it back safely and with a real sense of achievement.